For the past several months, talks of a government shutdown have grown louder and louder as members of Congress have battled it out over legislation to fund the government for the remainder of fiscal year 2011. The result of this long-winded debate has been a series of stop-gap spending measures to keep the government afloat while politicians bicker over the details.

NFFE, NTEU, and other federal unions have banded together to bring an end to Capitol Hill’s budget games once and for all. On April 5th, we need you to call your members of Congress and tell them to stop playing politics with your job!

Tell Congress to say NO to a government shutdown and the Republicans’ extreme cuts to federal agencies in H.R. 1. To assist you in these efforts, NFFE has developed a phone transcript that you may use when calling your elected officials. You can contact your elected officials (using your personal phone, on your own time) using the lists below. 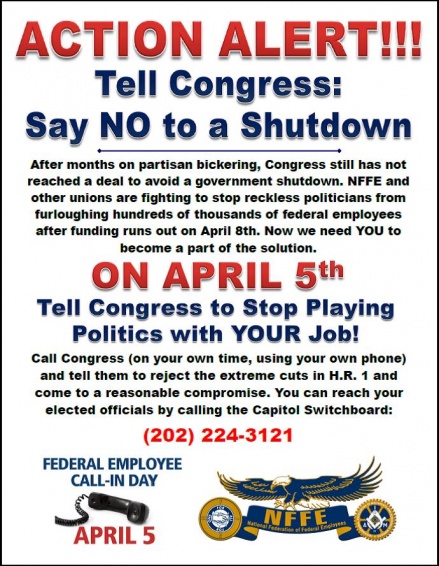