President Obama this week released a memo to federal agency leadership calling for a government-wide effort to reduce the gender pay gap in the federal workforce. With the study, the Administration hopes to find answers to this persistent disparity despite the government’s extensive efforts to equalize pay.

The gender gap has been an obstinate and deeply complex issue in the federal workforce for decades. Despite increasingly strict rules ensuring fairness in the hiring and promotion process, the gap survives. This is not to say that substantial progress has not been made – it undoubtedly has. The gap shrunk from 28 cents on the dollar in 1988, to 19 cents in 1998, to just 11 cents in 2007. Nonetheless, the figures have not improved much since then, and more needs to be done to eliminate it once and for all.

“The principle of equal pay for equal work is sacrosanct,” said NFFE National President William R. Dougan. “We fully support this review and urge our elected leaders to take positive action to pay our sisters the honest wages they have earned.”

The focus of the study will be on “administrative discretion” in the federal hiring processes, where some salary considerations are left to supervisors. This discretion is currently limited only to employees that demonstrate “superior qualifications” or meet a “special need” according to a recent piece in the Washington Post. The report will also review the implications of extended leaves of absence on pay patterns, since they are more common among female employees for purposes of childrearing.

The Office of Personnel Management was given six months to complete the report and return it to the White House for review. Agency leaders have three months to report their findings to OPM for aggregation and analysis. The review will cover employees paid under the General Schedule. 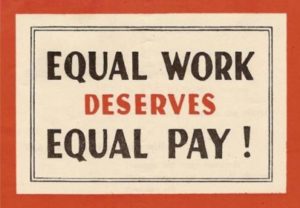