Nearly four years ago in July of 2009, 120 brave workers stood up to their company’s difficult working conditions and voted to form a Union. Today NFFE-IAM is proud to announce that the Downtown SAMs have officially ratified their contract, and are now full members of the National Federation of Federal Employees.

Under the new contract, Downtown SAMs will receive a general wage increases ranging from 6.5% to more than 10% over the course of the three-year agreement. Employees will also begin receiving a $75/month transportation subsidy. In addition to the financial benefits, workers will also see 3.25 additional days of sick leave while longtime BID employees will receive an extra week of vacation leave. Finally, employees will have the protection of a just cause provision, ushering in a new era of employee rights at the Downtown BID.

“I am inspired by the resolve these men and women showed through the whole process,” said NFFE National President Dougan. “We are proud to have negotiated a solid first contract that will give these workers must deserved increases in pay, leave, and improvements in working conditions.”

The Downtown SAMs, short for safety, hospitality, and maintenance employees, are employed by the non-profit Downtown Business Improvement District (BID) Corporation in Washington, D.C. They are the friendly folks in red you see giving directions to tourists around train stations and landmarks. Other clean the streets of DC and report criminal activity in high-traffic areas. All in all, their job is to keep downtown Washington clean, safe, and a pleasant place to be.

Despite their great work revitalizing the Downtown DC area, their working conditions needed a little revitalization itself. Concerns over pay, leave, and a fair process for complaints went unheeded, leading the SAMs to approach NFFE National Business Representative Roosevelt Littlejohn Jr. about organizing. Soon after Littlejohn did exactly that, securing a successful vote in July of 2009. But this is just where the story begins.

“When they first contacted me about their working conditions, I couldn’t just sit back and let it happen,” said Littlejohn. “I was moved by the conditions these workers faced and dedicated myself to making things better. It was a long struggle, and we are so proud that they stuck it out and got the Union contract they deserve.”

Through all of the years, the workers kept steadfast in their resolve for a better workplace, and saw the fight all the way through to victory. Now they are ready to begin a new era at the Downtown BID, securing for all current and future SAMs the dignity that comes with a Union contract. 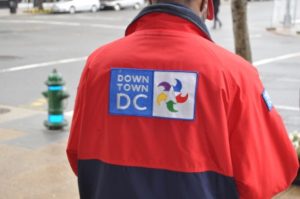