A group of House legislators introduced a bill this week to increase protection for federal, postal, and military retirees from unwillingly losing their federal pensions to predatory lenders. Regulators estimate that senior citizens lose $2.9 billion per year to malicious and manipulative financial schemes.

H.R.3310, The Annuity Safety and Security Under Reasonable Enforcement Act, or ASSURE Act, would extend the 1968 Truth in Lending Act to lenders who distribute loans on federal pensions. This would require lenders to be more transparent in disclosing information on loans costs, including absorbent interest rates. The bill, sponsored by Rep. Matt Cartwright, D-Pa., is actively supported by NFFE.

These loans are packaged as “pension advances,” offering retirees cash if they sign over their future pensions. However, these loans often carry excessive and burdensome fees and interest rates that are hidden from the retiree. The New York Times reported the average interest rates of these loans vary from 27 to a staggering 106 percent.

In addition to increasing transparency, the ASSURE Act would set the maximum interest rate at the widely used benchmark “prime rate,” plus six percent. Rep. Cartwright’s bill would also create a “private right of action,” allowing retirees to take legal action against lenders that do not comply with regulations.

The newly established Consumer Financial Protection Bureau would be given oversight and regulatory authority over these lenders.

“Federal pensions have long ensured that after a lifetime of service, veterans and federal employees would be able to live out retirement with dignity,” said Rep. Gerry Connolly, D-Va., the bill’s primary co-sponsor. “It’s our duty to protect retirees from unscrupulous lenders looking to make a quick profit.”

As of Wednesday, the legislation had 39 cosponsors.

“Preying on our nation’s retired population for a quick profit is unacceptable,” said William R. Dougan, National President of NFFE. “These retirees have devoted their lives to serving their country. The very least we can do is protect the dignity of their retirement and ensure they are not maliciously targeted by predatory lenders.” 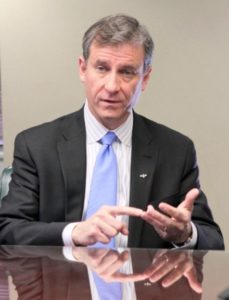