Were the amendment included and ultimately passed into law, the foundation of federal sector unionism would have been shaken to its core. Official time is a tool used in federal agencies to provide fair representation for employees and resolve conflicts within agencies. It is essential to achieving efficiency at federal agencies and it has enjoyed bipartisan support for decades. Without it, federal unions would have fewer options to defend the rights of members and non-members alike.

Despite this record of success, some in Congress are determined to deny federal employees a voice in the workplace by eliminating official time. These individuals will claim that cutting back on official time saves money, but the truth is that this debate has nothing to do with money. Attacks on official time are politically-motivated attempts to weaken federal unions and the employees they represent. If we are not proactive about defending official time, we will likely see many more attempts just like this one to abolish it.

“The truth is official time is a cornerstone of good government, but because it is perceived as beneficial to federal employee unions, some in Congress just want to get rid of it despite its undeniable value to federal agencies,” said NFFE Legislative Director Randy Erwin. “That’s why we need federal employees to be vocal about the importance of official time and their rights in the workplace. If we don’t speak up to defend our rights in the workplace, no one will.” 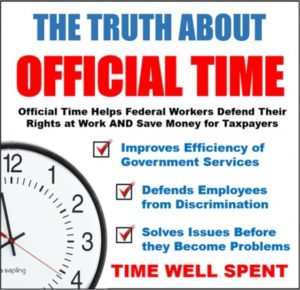