Back from Recess, Congress Spells Trouble for Federal Employees

Coming off one of the best months in Congress for federal employees (Congress was on recess, so they were not able to harm the federal workforce), Congress is back in town and is faced with numerous high-stake policy decisions to make before the federal government runs out of funds on October 1, 2015. The most glaring challenge for Congress as they return is to provide the federal government and all of its agencies the funds necessary to fulfill its mission without a lapse in appropriations.

What was once seen as the simplest of tasks is quickly becoming a partisan flash point every few months. Extremists in Congress see holding government funding hostage as an appropriate vehicle to achieve purely-partisan goals. In the historic 2013 government shutdown, republican extremists in Congress attempted to tie government funding to the defunding of the Affordable Care Act. What resulted was nearly one million federal employees had their lives turned upside down, crucial federal services were denied to the American taxpayer and the US economy took a $24 billion hit in economic output – all while achieving absolutely nothing. After sixteen days of a government shutdown, GOP lawmakers finally backed away from nearly sending the nation into default, and sent President Obama a “clean CR” (a short-term funding bill to continue government operations at their current levels).

Now, in just two short years after one of Congress’ most historical failures, the body appears to be on the brink of plunging the American people into chaos once more. In a move to defund women’s health centers, extremists in Congress (again, exclusively members of the GOP) are preparing congressional hearings in an effort to force President Obama to accept a budget without funding for women’s health centers – something he has stated clearly he will not do. NFFE recognizes that NFFE-IAM members have various opinions on Planned Parenthood funding, but NFFE strongly opposes the actions of tying this highly-partisan and volatile issue to the full faith and credit of the federal government. Divisive partisan issues have no place in the discourse of properly funding the government to carry out the business of the American people.

“It is a sad state of affairs when the best times for federal employees are when Congress is on recess,” said NFFE National President William R. Dougan. “The President has made clear that he will not sign a budget that does not boost government funding to pre-sequestration levels – and we applaud him for that resolve. NFFE and our allies will work around the clock to move a bill on Capitol Hill that adequately funds the federal government to pre-sequestration levels in time to avoid another disastrous shutdown. This era of austerity-driven budgets and kicking the can down the road continues to damage the American economy.  It is time for Congress to step up and do their job so that federal employees have the ability to do theirs. The citizens of this country expect, and demand, nothing less” 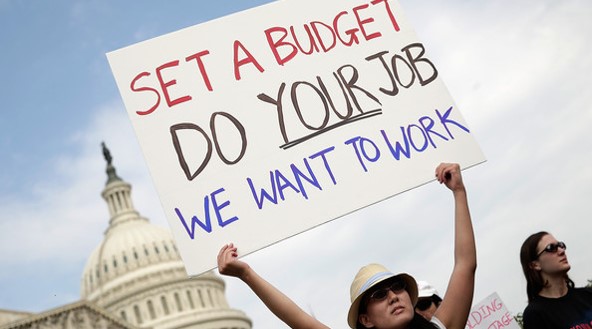 Congress must end governance by crisis and do its job: adequately fund the government