When certain members in Congress voiced their desire to hold government funding hostage over the President’s Executive Order on immigration earlier this month, congressional leadership knew they had to act in order to avoid a repeat of the catastrophic 2013 government shutdown. In what appeared to be heading towards an all-out fight between tea party and moderate members within the GOP, Congress now appears to be headed towards a funding compromise to keep the government funded beyond its current Dec. 11, 2014 deadline.

The solution devised by congressional leaders will be in the form of another short-term continuing resolution, but will also include a few long-term funding measures for certain agencies. Notably, there is a significant push to find avenues to defund any implementation of the President’s newly-signed Executive Order. However, the final details of the plan remain uncertain and are expected to be rolled out in the days leading up to the Dec. 11, 2014 funding deadline.

Unfortunately, the threat of a government shutdown is becoming a common tactic for desperate members of Congress to air their overtly-partisan ambitions. The fact that aimlessly punishing millions of Americans while wasting $24 billion in taxpayer dollars is considered a good negotiating tool is disheartening.

“It’s a sad day when kicking over a million people off the job to make a partisan statement is considered a good negotiating tool,” said NFFE National President William Dougan. “If members of Congress have problems with decisions made by the President’s administration, they should direct those grievances to the President. Throwing the lives of federal employees into turmoil as a method to send a partisan message to the President is a gross abuse of power. Amidst repeated threats of a shutdown, increased pension contributions and paltry pay adjustments that fail to address cost-of-living increases, it is no wonder the morale of federal employees continues to fall.” 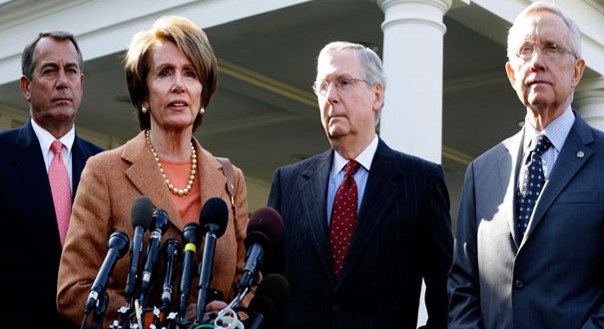 Congressional leaders appear to have a government funding solution