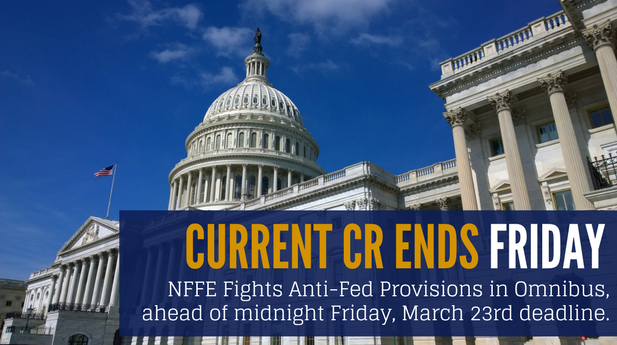 Congress has until midnight on Friday, March 23, to pass legislation to keep the government running after the current Continuing Resolution expires.

House and Senate leadership have four legislative days to negotiate an agreement between parties and chambers to avoid another shutdown.  On the table is one of the last must-pass pieces of legislation of the year: The FY 2018 Omnibus bill which, if passed, will fund the government until September 30, 2018.

With elections just months away, some lawmakers are using the ‘must-pass’ Omnibus bill as an occasion to pass their own legislation, most of it aimed at boosting their standings in their own campaigns.  Unfortunately, some of the legislation proposed by individual lawmakers targets federal employees and their families.

“Much of the Omnibus negotiation is happening behind the scenes, away from the eyes of the American public,” stated NFFE National President Randy Erwin.  “This scenario gives legislators who are anti-federal worker a chance to include provisions that harm federal employees, such as relaxing outsource policies, altering pay and benefits calculations, or tampering with civil service protections.”

The Trump budget proposed cutting more than $300 billion over 10 years, with all cuts taken from federal pay and benefits, and the downsizing of the government.  With the stakes higher than ever, NFFE fights to keep those cuts from making their way into appropriations bills, such as the FY 2018 Omnibus bill now under consideration.

“We push our way into those negotiations behind the scenes,” continued Erwin.  “We don’t wait for an invitation.  That’s not our style.  If you’re not at the table, you’re on the menu.”