Since 2013, Local 1998 has been working diligently to negotiate a new collective bargaining agreement (CBA). NFFE Local 1998 represents over 1,300 employees spread across 28 different offices around the county working for the Department of State’s Bureau of Consular Affairs Passport Agency. The NFFE-IAM members represented are largely passport adjudicators responsible for verifying US passport applicants’ provided documentation, and ultimately approving or denying the issuance of passports.

Local 1998 leadership has sought to ensure every NFFE-IAM members’ voice is heard at the bargaining table, and that effort began with the Local surveying its membership as it prepared to enter negotiations.

“We wanted to make sure that every member was involved and had a say in this process,” said Local 1998 President Rob Arnold. “Everyone deserves a seat at the table, and our survey was aimed at doing just that.”

While Local 1998 does have a dedicated negotiation team, the survey allowed every member a chance to state what they found to be most important in the upcoming negotiations. With results in hand, Local 1998 negotiators delved into what has become a multi-year ordeal.

With Local 1998 representing passport adjudicators at 28 different offices around the country, negotiations often move between facilities. When negotiations began, they were staged at the Charleston Passport Agency in South Carolina. Since then, negotiations have moved from coast to coast, with the most recent negotiations taking place at the Passport Agency’s Washington, DC office.

For many, moving contract negotiations may seem like a logistical nightmare. However, for Local 1998, the roving negotiations allow for Local officers at each facility an opportunity to shape the ongoing negotiations. Local 1998 has worked extensively with the William W. Winpisinger Center staff to properly train and prepare its officers stationed throughout the country to play a significant role if and when negotiations reached their facility.

“Negotiations can be difficult,” said NFFE Business Representative Steve Flory, the chief negotiator. “However, when you have well-trained Union negotiators through the Winpinsinger Center and other experienced members, it creates an outstanding team. We have real collaboration with management, and I hope that this successful relationship will continue. I feel confident that the finished contract will serve the Union and our membership very well.”

Negotiations are scheduled to continue through 2015. 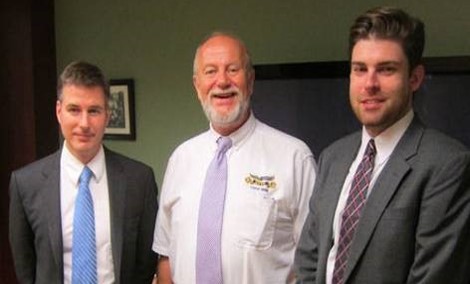