A machinist and later electronics technician by trade, Pittaluga’s most recent role was Vice President of IAM Local Lodge 2783 at the Trident Refit Facility on the Naval Submarine Base in Kings Bay, GA. Over her 20-year career at the base, she has also served as both steward and chief steward, representing the interests of more than four hundred members.

“It has been my honor to serve in the IAM, and I look forward to serving all NFFE members with the same dedication and diligence” said Pittaluga. “I look forward to developing a relationship with all of you, and I know that you will support me as I begin this journey.”

Decades of service to the labor movement have earned Pittaluga a long list of experiences to draw from in her new role as a NFFE National Business Representative. Over the years she has saved the jobs of coworkers who were wrongly terminated, settled a $1.2 million arbitration case for employees, and recruited/trained new officers to serve the union. As a NFFE representative, she plans to incorporate the same values and work ethic that led her to become such a well regarded leader within her Local, and the IAM generally.

“We are fortunate to have such a great addition to the NFFE family,” said NFFE National President William R. Dougan. “The breadth of her federal labor relations experience combined with her can-do attitude will undoubtedly pay off for all those she serves.”

Starting September 26, Pittaluga will service a newly drawn region that encompasses much of the Midwest United States, including Locals in Illinois, Indiana, Iowa, Kansas, Kentucky, Michigan, Minnesota, Missouri, Ohio, and Wisconsin. This new region is one part of a broadly redrawn servicing map (found below) which will go into effect on that same date. 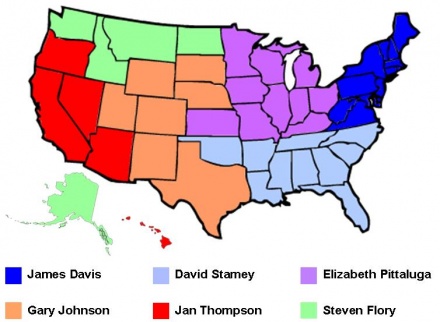