With the new Congress being sworn in this week in Washington, freshmen and veteran lawmakers are getting accustomed to their new colleagues that they will be working with over the next two years. With the election bringing a wave of new faces to Congress, there has also been numerous changes in the makeup of Congressional Committees in both the House of Representatives and the Senate. Earlier this week, NFFE discussed the incoming chairman of the Senate Homeland Security and Government Affairs Committee – the committee charged with oversight of the federal workforce. Today, we take a look at the committee charged with federal workforce oversight in the House, the Oversight and Government Reform Committee, and its new chairman, Rep. Jason Chaffetz (R-UT).

Representative Chaffetz, elected in 2008, has made his intentions very clear to take the Oversight and Government Reform Committee in a different direction than his predecessor, Rep. Darrell Issa (R-Calif.). Representative Issa would routinely focus on issues that were seen as highly partisan, and was well known to be boisterous and even rude during his chairmanship. Chairman Chaffetz has condemned Representative Issa’s demeanor as chairman, and has vowed to make the committee more cordial. This call for more civility comes as no surprise to those who know Rep. Chaffetz, as he is commonly described as an amiable leader more focused on reforms aimed at good governance.

Chairman Chaffetz is described as an even-keeled leader, but his positions towards federal employees are a cause for concern. The Chairman repeatedly voted for federal employee pay freezes, supported sequestrations and the furloughs that followed, and has not been shy in his efforts to eliminate official time. So while the Chairman’s niceties are welcome, his voting record would indicate that federal employees should brace for a new onslaught of congressional attacks.

“Chairman Chaffetz says he is going to run the committee differently than Congressman Issa did, and that change would be welcome in my view,” said NFFE National President William R. Dougan. “We look forward to an open and strong dialogue with the chairman during his tenure.” 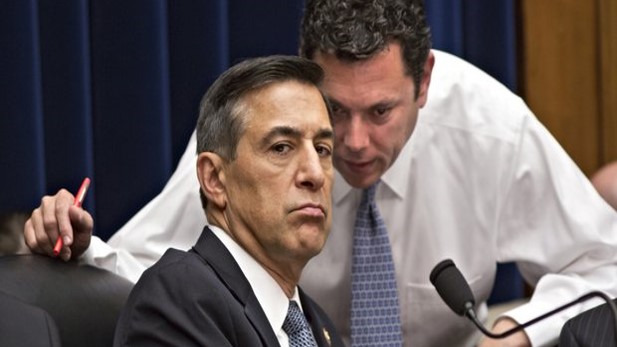 Chairman Chaffetz (R-UT), having a discussion with his predecessor, Rep. Darrell Issa (R-Calif.)