Despite only being in the fourth year of his first term, Sen. Ron Johnson (R-Wis.) is in line to become the new Chairman of the Senate Homeland Security and Government Affairs Committee when the 114th Congress is sworn-in this January. While the Senator’s name is still new to many in the halls of Congress, it will undoubtedly become commonplace in federal employee Union halls across the country. Senator Johnson is being given great authority in his committee chairmanship, and if his recent history on the committee is any indication, one would expect that he intends to target federal employees – and their Unions – from his first day holding the gavel.

With the leadership of the 114th Congress largely set following the 2014 election results, Sen. Johnson has participated in numerous media interviews to outline his plans and priorities as Chairman of the Senate Homeland Security and Government Affairs Committee – the committee charged with oversight of the federal workforce. Among his first goals will be to re-evaluate federal employee pay. According to the Senator, federal employees are overpaid, despite the Bureau of Labor Statistics concluding that federal employees make 35 percent less than their private-sector counterparts. Other priorities of the Senator include: eliminating the Federal Employee Retirement System (FERS) Basic Benefit Plan, ending the FERS early-retirement supplement and calculating federal annuities on the highest five years of salary rather than the existing three. Additionally, the Senator has been vocal in his opposition to federal employees being unionized.

While the Senator has been forthright in recent weeks about what issues he would like to see handled while he is chair, he also issued a 16-page report in 2011 on cuts that could be made to the federal government in the name of deficit reduction that can be viewed here (hint: the cut proposals are extremely harsh to federal workers).

Despite Senator Johnson being very clear on his positions on many key issues NFFE-IAM members (most of which are in direct opposition to NFFE’s position), NFFE will work to find common ground with the Senator during his chairmanship. NFFE will be active in collaborating with the Senator and the committee he chairs during the next Congress.

“Senator Johnson has outlined ambitious goals as Chairman of the Senate Homeland Security and Government Affairs Committee,” said NFFE National President William Dougan. “While many of his stated goals run contrary to NFFE’s positions – particularly with respect to federal workers pay and retirement security – we will nonetheless aim to work constructively with Chairman Johnson. We want many of the same things when it comes to helping federal workers deliver critical services to the American people. We hope the Committee under Sen. Johnson’s leadership will be committed to improving government service by working with and listening to federal workers while compensating them fairly. However, we recognize the new leadership could move the Committee in a different direction. That will not make for a very productive session of Congress, but we are prepared for that possibility. However it shakes out, NFFE will be there to support and protect the federal workers we represent.” 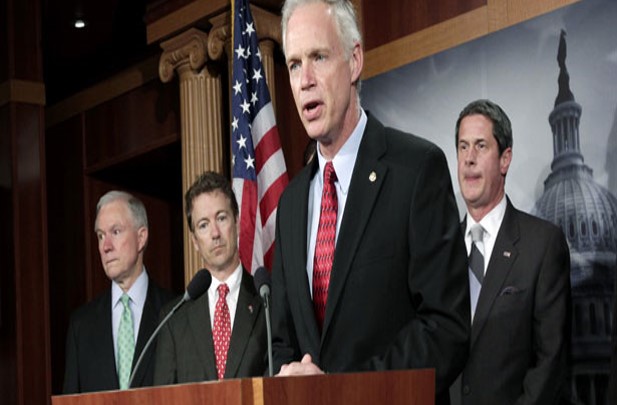