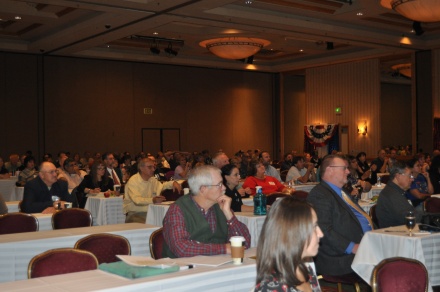 Last week, Local 1771, Region 5, and the NFFE Forest Service Council hosted its 16th annual Union Officers and Stewards Training in Reno, Nevada. Council/Local officers, members, and National Office staff from throughout the country convened to collaborate on labor-management issues. As this event marked the first time in several years members, as well as management, assembled together to confront the complex challenges facing unions today, NFFE National President William R. Dougan and Office of Personnel Management Director John Berry used the opportunity to unveil some exciting additions to the union agenda for the upcoming year.

On Tuesday, Director Berry opened his remarks by articulating the importance of building relationships:

“You’re here today because you know that relationships are the key,” said Berry. “That building relationships builds trust. And that trust leads to a better work environment, improved morale, improved productivity, and ultimately, improved service to the American people.”

The afternoon concluded with panel discussions on labor-management forums. In addition to the officials cited above, the panel also included Justin Johnson, Deputy Chief of Staff at OPM, who spoke about efforts being made at OPM with its workforce as well as the guidance OPM has put out in attempting to foster collaborative labor relations across the government. Unfortunately, no high ranking officials from the Forest Service were in attendance due to the unexpected absence of Charles Meyers.

“The presence of so many high-level officials demonstrates the commitment of the Obama administration to the concept of labor and management working together to create a better and more efficient workplace to better serve the American people,” said Ron Thatcher, NFFE-FSC President. “For our part, we will always be ready to work collaboratively with management to achieve this noble goal.”

On Thursday, the program opened with NFFE’s General Counsel Stefan Sutich who addressed the ways that NFFE National is attempting to support its councils and locals in effectively representing employees and provided updates on recent FLRA decisions. Tony Cardillo, of the Office of Special Counsel trained the attendees on the role of OSC in investigating Prohibited Personnel Practices.

Later in the afternoon, officers and stewards were trained on the new Master Agreement between NFFE and the Forest Service, which came into effect on October 25th. FSC President Ron Thatcher credited the sentiments of collective organization as the impetus which propelled the Master Agreement to victory.

Thatcher outlined the highlights of the new Master Agreement, trumpeting the new provision whereby employees may take leave to care for a broader range of family members (including domestic partners) with a serious health condition than those covered under the Family and Medical Leave Act. The same provision also allows bargaining unit employees, regardless of their marital status, to take up to three months of unpaid leave and/or annual leave to care for their partner’s newly born or adopted child. Berry specifically mentioned the extension of FMLA-like benefits to a broader range of family members as a ground-breaking achievement. In addition, he offered support for the Council’s work to reform temporary employment practices. Many other new provisions designed to ensure a fair and just workplace were discussed in detail.

Thatcher’s message was triumphantly received by OPM Director John Berry and all of the Forest Service Council members who attended the conference.

“Through this agreement, NFFE and the Forest Service have set a model for what a partnership forum can accomplish,” said Berry. “You’ve taken the President’s Executive Order on Labor-Management as the starting gun, and galloped off to the races. It’s thrilling for me as the Director of OPM to see a conference like this one where unions, managers, and senior leaders come together to develop collaborative, productive relationships.”