Over 100,000 Signatures Strong – Wildland Firefighter’s Health Care Petition Becomes an “All for One” and “One for All” Effort

NFFE is asking federal workers to support the cause of one man for the sake of many. His name is John Lauer, NFFE-IAM member and seasonal wildland firefighter with the U.S. Forest Service. John is on a mission to help the brave men and women on the fire line gain access to affordable health insurance – and his work has just begun.

What started first as a small petition among John and his fire crew has since skyrocketed into a 108,105 signature rallying cry for health care – all in the matter of a just few days. You can sign the petition by clicking here.

His reason for starting the petition? After the premature birth of his godson, it pained him to know that his coworker’s family was suffering without health insurance. The family received a $70,000 medical bill after the birth of their son. Without insurance or financial resources to cover the cost, the family is running short on options. Lauer knew that this was no way to treat our firefighters, and now, over 100,000 people from every state in the nation agree: the injustice must come to an end.

Today, the federal government does not allow many temporary/seasonal employees to participate in its health insurance program. Since wildland firefighters are hired on during fire season each year (typically May-October), they are deemed ineligible to purchase insurance. Thousands of firefighters work grinding hours in some of most rugged terrain the nation has to offer. In their line of work, serious injuries and fatalities are an all too common occurrence. For them, health care is not a luxury – it’s a necessity.

“These are some of the bravest, most dedicated people I have ever met,” said Lauer in a recent media release. “They come back year after year and put their lives on the line to protect their communities and serve their country. They deserve insurance”.

These unspoken heroes of the federal workforce do their part every year to keep Americans safe from the disastrous effects of wildfires. Now is the time for America to give back to those who have sacrificed so much for them.

Please do your part and support this cause by signing the petition today. 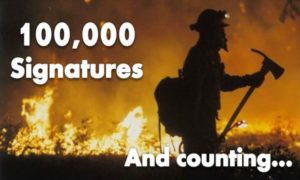