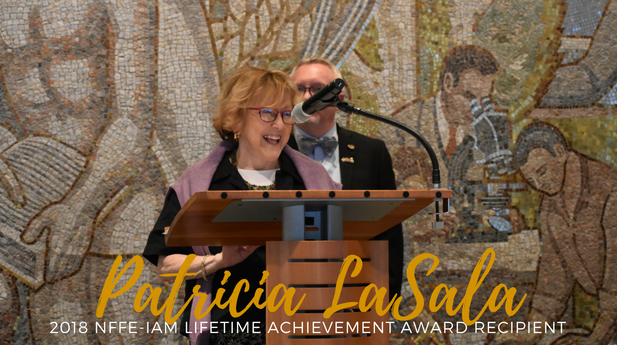 As NFFE-IAM members from across the country stormed Capitol Hill to lobby their elected officials this week while in Washington, D.C. for the IAM Legislative Conference, NFFE National President Randy Erwin took the opportunity to award one of our union’s longest-serving elected leaders, Patricia La Sala of Local 1, NFFE’s Lifetime Achievement Award.

This award is given to those who have made an enduring mark on our union with their sustained commitment to our members and the principles that uphold the Labor Movement. La Sala received her award in front of scores of her union brothers and sisters at a ceremony held at the national headquarters of the AFL-CIO.

As a 22-year union member, most of which Patti served in a leadership capacity, La Sala had many accomplishments in the areas of organizing and representation, all while providing the highest standard of care for our nation’s veterans.

La Sala started at the San Francisco VA Medical Center in August of 1980 as an Associate Chief Nurse. As a supervisor, she was not able to join the union until 1996, when she accepted a position in that made her union-eligible.

In 2000, La Sala became the president of Local 1. In the years that followed, she built a team that has grown the local from 12 nurses to over 700 professional employees from over 30 different groups, from architects to engineers to social workers.

Not only has La Sala been a leader within her local, she has also stepped up to be a leader on NFFE’s National Executive Council. For the last fourteen years she has tirelessly worked to grow our union and serve NFFE-IAM members, and in doing so, has become one of the longest serving female NEC member in NFFE’s history.

Our union is certainly not the only entity to recognize La Sala’s service. In 2008, under Patti’s leadership, Local 1 won the Secretary of the VA’s Award for Labor-Management Relations –  the highest award the VA gives for labor-relations. La Sala was also presented with the Margery Gingery Award for Public Employees in 2014 for exemplary labor-management cooperation and collaboration.

When asked how she felt about receiving NFFE’s Lifetime Achievement Award, La Sala said, “I am overwhelmed to receive this award. I have worked with so many tremendous unionists; I was shocked and humbled to be honored in this way. I’m a unionist every day. There’s nothing special about me. I just don’t accept no for an answer.”

Although La Sala officially retired as a nurse and the president of Local 1 in May of 2013, she has not let that stop her from continuing her very important work. As the Chief Organizer at her local, she continues to volunteer her service two to three days a week.

“Unionists like Patti are special and rare,” said NFFE National President Randy Erwin. “She has given so much of herself to this union, and been an inspiration to so many, it only makes sense to award her NFFE’s Lifetime Achievement Award. It is an honor to know her and to work with her. No one is more deserving of this honor.”