The Day that Was: A Recap of Day One of the NFFE National Convention

Day one of the 49th NFFE National Convention is officially in the books, and the mood inside the convention hall here in Portland, OR could only be described as emotional. Packed with speeches from labor leaders within and outside of NFFE, the message of the day was clear: there is strength in unity.

In addition to addresses by National President Dougan and National Secretary-Treasurer Fenaughty, day one also featured speeches from notable leaders such as Congresswoman Suzanne Bonamici (D-OR), IAMAW International President R. Thomas Buffenbarger, AFL-CIO Metal Trades Dept. President Ron Ault, and NAGE National President David Holway. The speeches covered a wide array of topics, but the theme persisted that workers and unions are always stronger when they work together – especially in the face of adversity.

“Today we face one of the most hostile political, media, and budgetary environments ever known,” said Dougan. “Dozens of politicians seek to build their careers up by tearing the federal employee down; pundits propagate lies that we are overpaid and underworked; and painful budget cuts are set to fall squarely on the backs of federal employees.”

“As we forge through this storm and take our lumps where we must, we must not forget the struggles of our forefathers and mothers. Where once they had nothing, through hard work, dedication, and a fierce belief in the virtue of collective action, they created something bigger than themselves. If we are to defend the basic privileges they had fought so hard for, we must channel their resolve and maintain the spirit that tomorrow will always be a better day if we work to make it so.”

In a fiery speech of his own, Metal Trades Dept. President Ault spoke passionately about the close working relationship between NFFE and other unions over the past several years. As partners on many federal boards, working groups, and labor alliances, NFFE and Metal Trades have focused our collective efforts on representing the interests of federal workers during this difficult period.

IAMAW International President Buffenbarger echoed this sentiment in his keynote address. He urged delegates to speak up to the anti-union, anti-federal employee pundits and members of Congress spreading lies about the work we do and the modest compensation we receive.

“Federal employees need not be ashamed of what they do,” said Buffenbarger. “Be proud of what you do. You give us a secure, civilized society for everyone’s benefit. You are the people who make America work!”

Buffenbarger continued by discussing the looming threat of sequestration – $1.2 trillion in automatic cuts to federal agency budgets scheduled to begin on January 2, 2013. He described it as a “sword dangling over the head of every federal employee and government contractor,” that had to be stopped.

Rep. Bonamici, a freshman Congresswoman from Portland, OR. also called for an end to the ceaseless targeting of federal workers by certain members of Congress. Pointing to the two-year federal pay freeze and substantial cuts to retirement benefits, Bonamici told the delegates that enough was enough.

“Federal employees have already sacrificed cuts in their pay and benefits, and I’m not going to ask them to bail us anymore out for a financial crisis that they did not create.”

Throughout the entire first day of the Convention, the only force to rival the passion of the speakers was the roar of the delegates in attendance. Representing members from across the country, brothers and sisters from all walks of life have come together in solidarity to do the work of their union. As the speakers return to their homes, and the Convention comes to an end in just a few short days, the fire ignited in the hearts of delegates will remain, bringing light to all those seeking fairness and justice at work.

There is no doubt that day one of the Convention was a smashing success. Stay tuned for our next update covering the comings and goings of day two of the 49th NFFE National Convention. 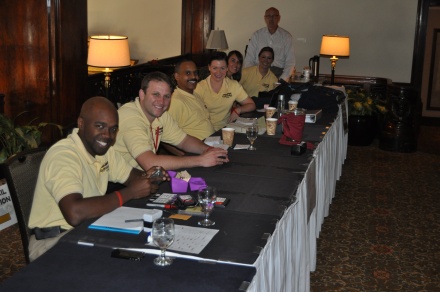