With fires burning hundreds of thousands of acres across the U.S., the need for a strong firefighting force is more apparent than ever. Thousands of federal firefighters, along with state and municipal allies, are putting their lives on the line to protect our national treasures, communities, and citizens.  Despite their heroic efforts, a serious lack of resources is holding back the firefighting agencies from accomplishing their mission.

Arbitrary and irresponsible cuts in wildfire suppression have put our nation at risk. The sequester removed 500 firefighters and 50 engines from the ground, reducing firefighting agencies’ capacity to respond to wildfires when they occur. And the administration’s 2014 budget proposes a 24% reduction in hazardous fuels removal even after the House Appropriations Committee found that firefighting budgets across government are already underfunded by $700 million.

Earlier this month, Forest Service Chief Tom Tidwell announced that the fire suppression budget had run dry prematurely. The announcement came just days before the National Interagency Fire Center raised its preparedness to a Level 5, meaning wildfires across the country “have the potential to exhaust all agency fire resources.” To keep firefighters on the fire line, the Forest Service must transfer $600 million from other vital programs like reforestation, trails maintenance, timber harvesting, and forest and range management.  To meet this emergency, even programs that reduce the risk of devastating wildfires have been raided.

For eighteen-year wildland firefighter and NFFE member Joshua Northrup, some of these cuts hit very close to home. “In Washington State’s Wenatchee River Ranger District where I work, we have suffered the loss of a 20 person hand crew and an engine in the last year alone, reducing our local initial attack forces by 30%,” says Northrup in his petition. “These cuts happened just months before the start of the Wenatchee River Complex fire which burned more than 45,000 acres. Were it not for the hazardous fuels treatments we conducted before the blaze, we may not have been able to stop it before reaching the city of Wenatchee.”

Northrup, who has worked on hotshot crews, a helicopter rappel crew, engines, and several hand crews over the years, decided it was time to act. He started a petition this week calling on elected leaders in Washington stop the reckless cuts. To Northrup, these cuts were arbitrary and dangerous, putting the public he had sworn to protect at serious risk. In just a few short days, thousands have agreed, signing the petition and making their voices heard. But this is just the beginning – we will need thousands more to stand up and speak out to get the resources our firefighters need to protect us.

“Please join me in asking our elected officials in Washington, D.C. to do the right thing for wildland firefighters and the communities we protect all across America,” said Northrup. “Demand that Congress return the funds taken by sequestration and fully fund fire suppression and hazardous fuels reduction activities in 2014. Sign our petition today.”

(Please sign from your own computer, on your own time.) 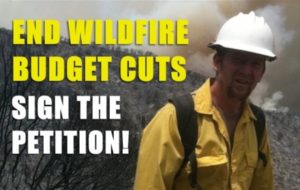