Budget Experts: Forthcoming Sequestration Cuts Will Result in Furloughs in 2013

Several leading budget experts believe that next year’s massive sequestration cuts will result in furloughs and RIFs at many federal agencies, according a recent piece in Government Executive magazine.

The experts, speaking at the magazine’s annual Excellence in Government conference last week, predicted tough choices if the scheduled $100+ billion cuts were to be implemented. Chief among them is Bill Hoagland, a longtime budget advisor to former Senators Bill Frist and Pete Domenici. He argued that furloughs were the likely option for cash-strapped agencies pressured by crippling budget constraints. Worse yet, he expressed a pronounced pessimism that a compromise could be reached in time to avoid the budget axe.

“Sequestration is the most serious threat to the federal workforce in decades,” said NFFE National President William R. Dougan. “If Congress does not reach a reasonable compromise to avoid these cuts, we will see a large scale hollowing-out the workforce. This would impact not just employees, but the taxpayers who rely on vital services to keep their food safe, borders secure, and water clean.”

Sequestration cuts are automatic, across-the-board spending reductions resulting from the Joint Select Committee on Deficit Reduction (also known as the Congressional ‘Super Committee’ failed to reach an agreement to responsibly reduce the deficit. Sequestration is designed to be a painful process, serving as the failsafe to ensure a deal was reached. As we now know, it did not have the intended effect, leaving federal employees and millions of others vulnerable to a series of wrenching cuts.

Fortunately there is still time for compromise. Many in Washington believe Congress will make one last attempt to avoid sequestration following the Presidential election during the so-called ‘lame-duck’ session of Congress. This gives federal employees a brief window of opportunity to make their voices heard.

Don’t let this opportunity go to waste – call your members of Congress (on your own time, using your own phone) and tell them to protect federal employees by delivering a responsible compromise. To learn more about what you can do to engage Congress, visit NFFE’s Legislative Action Center. 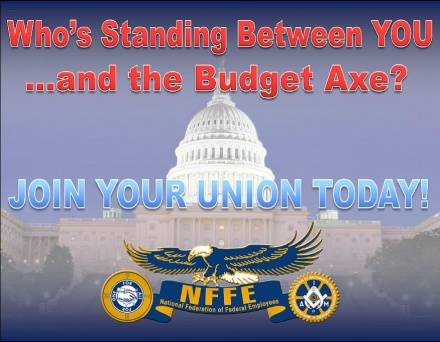