Federal Pay Scheduled to Increase by One Percent in January 2014

Following a 16-day shutdown that locked federal employees out of their jobs, President Obama signed a bill that reopened the government. Included in that bill was a provision providing back pay to furloughed government workers. However, what was not in the bill may prove to be just as important to federal employees.

Barring congressional intervention, an across-the-board one percent raise to federal employees will go into effect Jan. 1. The plan was submitted by Obama in August, which only counts basic pay when calculating the one percent increase and keeps locality pay levels at their 2013 figures. In December, Obama will have to issue a presidential order to finalize the raise although Congress may renew efforts to continue the pay freeze. If the one percent raise goes into effect in January, it would break a three-year pay freeze that federal employees have endured.

“Civilian federal employees have already made significant sacrifices as a result of a three-year pay freeze,” Obama wrote in a letter to Congress.

Senator Ben Cardin (D-MD) introduced the Federal Employee Retroactive Pay Fairness Act, which was cosponsored by Senators Barbara Mikulski (D-MD), Mark Warner (D-Va.) and Tim Kaine (D-Va.). The Cardin bill, which was included in the final agreement approved Wednesday, guaranteed that federal workers who were furloughed because of the lapse in federal funding or government shutdown would receive their full pay.

“Whatever happens in the current budget negotiations, we will be working to make sure federal employees are not dragged through the mud once more,” National President of NFFE, William Dougan, said. “Federal workers have weathered attack after attack by Congress, and it is time federal workers are provided peace-of-mind from Congress and are not targets.”

If the one percent raise goes into effect Jan. 1, it will break a three-year pay freeze that federal employees have endured. 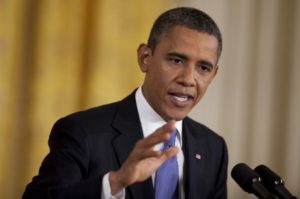