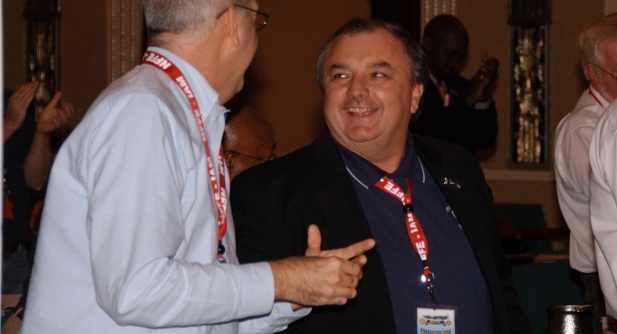 It is hard to imagine the National Federation of Federal Employees (NFFE) without National Business Representative (BR) Jim Davis on staff. Having served nearly 34 years as a BR, Jim has been a pillar of strength for this union for as long as practically anyone can remember. In fact, he is currently NFFE’s longest-serving staff member – including all NFFE headquarters and field staff.

On Friday, August 30th, Jim will bring his stellar career with NFFE to an end, but he has been very clear about one thing:

“I’m retiring from the job, not the Labor Movement!”

Jim will continue as a full dues-paying member of NFFE Local 2 during his retirement.

That is the kind of dedication you get from a person who has had the love of the union running in his blood since his high school years.

At 17, Davis saw the unfair labor practices of a national grocery store chain and helped orchestrate picket lines against the injustices that were occurring. He described this as the experience responsible for “lighting the fire in his belly,” – a fire that has never been extinguished.

After earning undergraduate and master’s degrees, Jim returned to the Labor Movement. In 1985, Davis became a BR for NFFE in the Southwest region, then transferred to the Northeast a few years later. While stepping up and accepting many different critical assignments for NFFE over the years, Davis – a Philadelphia, PA native – concludes his career in his home-territory, the Northeast.

While Jim has enjoyed many aspects of his work as a BR and has numerous accomplishments to his credit, Jim points to three successes of which he is most proud. The first and second are organizing successes. Davis played critical roles in organizing NFFE Local 2109, Watervliet Arsenal and NFFE Local 2189, Red River Army Depot, both of which are among NFFE’s biggest locals.

Jim’s third self-identified most-significant accomplishment involved a successful effort in 2006 to save the jobs of about 500 employees of the Coast Guard Civil Engineering Corp who were having their jobs outsourced, many of them a part of NFFE Local 1164. “It was by far the most memorable occasion,” said Davis. “We did not just save the jobs of those people in our area, but also the jobs of workers from all over the country.”

A feather in Jim’s cap, indeed.

One final aspect of Jim’s distinguished career at NFFE that deserves recognition is the role he played as a mentor for many young leaders in our union.

“I will always be extremely grateful for the immense role that Jim played in helping to guide and empower young leaders in this union,” said NFFE National President Randy Erwin. “I have never seen anyone embrace the role of mentor with such selfless vigor. Early in my career I learned so much from Jim; but is wasn’t just me; it was literally dozens of people over the years that Jim took under his tutelage and helped develop into dedicated and effective unionists. To me, that is Jim’s most impressive legacy in this union. Thank you, Jim, for 34-years of dedicated and loyal service to NFFE. This union, and federal employees everywhere, are better off because of your efforts. Thank you!”

Please join us in thanking Jim Davis for his remarkable service. Jim, you will be greatly missed!