Each year the United Nations convenes for one week to specifically address issues impacting women throughout the world, from gender and labor rights to economic policies that promote equality within the international labor movement. This year, the AFL-CIO hosted for the first time a group of Union women activists to participate in these meetings as well as receive rigorous training on the global economy and its impact on working women.

On March 13-16, 2016 fifty Union women from throughout the country gathered together in New York City for the AFL-CIO’s inaugural Women’s Global Leadership Program. The program brought together Union sisters from both the private and public sectors to learn about the global labor movement while advocating for gender equality and inclusive international development at the United Nation’s Commission on the Status of Women.

In addition to leadership trainings, the NFFE-IAM delegation joined side-meetings at the United Nations Commission on the Status of Women as representatives of the US trade movement. Thousands of women from trade unions and civil society organizations from across the globe attended these meetings, making it one of the largest gatherings of women in the world.

“Every day, we practice solidarity within our workplaces, local lodges, and communities, but to see the solidarity between working women from over 120 different countries throughout the world was a powerful and humbling experience,” recounted Burns.

With a more vast and diverse network of Union sisters to rely on in the fight for justice and equality, the participants in the Women’s Global Leadership Program returned home with a better understanding of how workers throughout the world are united. They undoubtedly look forward to fighting for fairness together. 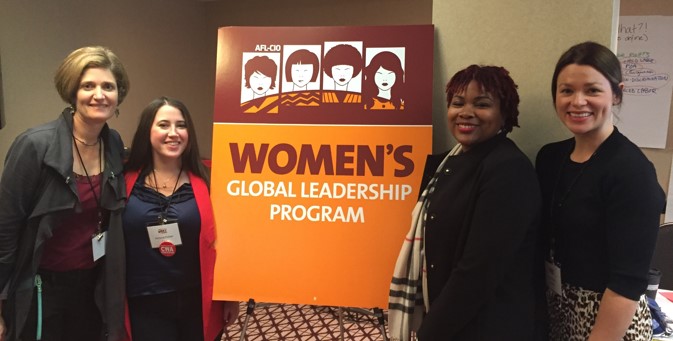