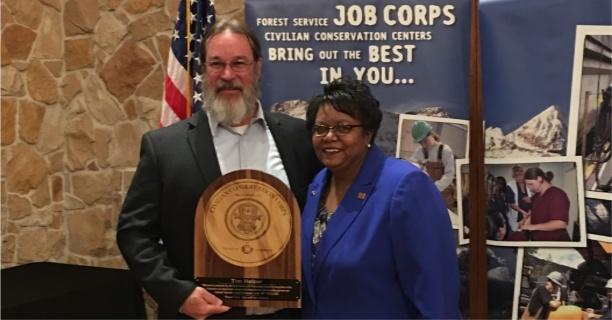 On April 26, 2017, NFFE 1697 Local Lodge President Tim Heltzer was presented with an Achievement Award by the Forest Service Civilian Conservation Corp (CCC) Partnership Council for his commitment to labor-management collaboration. The award was presented at the Center Director’s annual Awards Conference in Denver, Colorado.

Heltzer is the first recipient of the Forest Service CCC Partnership Council Award which will now be awarded annually to a person who exemplifies the spirit of teamwork and is dedicated to making the partnership between NFFE and the Job Corp Management a success.

“Brother Helzer was the obvious choice for this first Partnership Award. In fact, it was a unanimous decision by both the union and management. Tim is tough, he knows the Master Agreement as well as anyone, and he has always been a proponent of dialogue and collaboration,” Bev Tobin, CCC Council Vice President, remarked.

After 35 years of service in the federal government and 28 years within the Civilian Conservation Corp, Helzer knows what it takes to make progress when it comes to partnership. “Communication is important, and ours has improved because of this partnership. We’re always going to be more effective when we’re working together to solve problems,” Helzer reflected.

The award Helzer accepted was especially meaningful as it was made by a student at the Frenchburg Job Corp Center. Now embarking on retirement after a long and fruitful career, Heltzer remarked, “I’m appreciative of the award, but I’m even more heartened that the partnership exists and is growing to become more and more effective.”