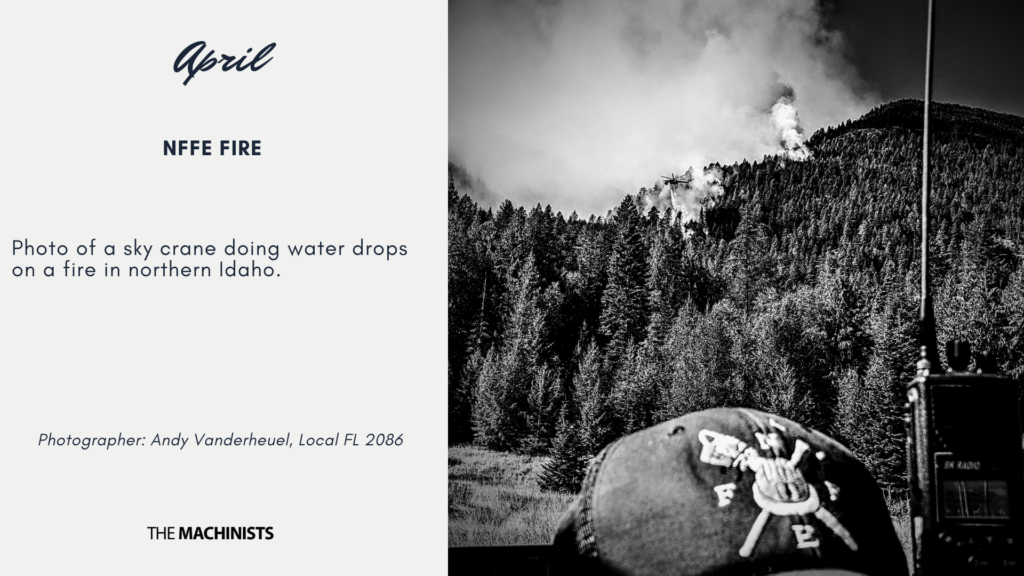 In November, the International Association of Machinists (IAM) announced it’s winners for the 2022 Photo Contest, awarding NFFE Local 2086 with three winning entries. The winning pictures will be showcased in the popular IAM Calendar for 2023, which supports the Guide Dogs of America with each sale.

Local 2086 member Timothy Donohoe’s photo of wildland firefighters crossing an improvised log bridge during suppression efforts at the Middle Fork Complex Fire in the Willamette National Forest is on the calendar for the month of March.

Fellow 2086 member and NFFE Forest Service Council Vice President Andy Vanderheuel’s photo of a sky crane dropping water on a fire in northern Idaho featuring a NFFE Fire hat in the foreground will be used for April.

Lastly, December’s picture is a photo of Vanderheuel conversing with U.S. Department of Agriculture Secretary Tom Vilsack after a meeting at U.S. Forest Service Headquarters in Washington, DC on wildland firefighter workforce reforms.

“It was a great opportunity for me and other NFFE wildland firefighters to have an honest discussion with Secretary Vilsack,” said Vanderheuel. “The photo that was taken after the meeting was of me thanking him on behalf of all the BUEs for allowing us to use the hours of early release that have been granted during the Biden Administration over several pay periods as opposed to just the day it’s granted. Firefighters are often unable to take advantage of early release because they are out fighting fires. This was the first time in my career that a Secretary has allowed us to use that leave time at our discretion, so I made a point to thank him for it.”

“Congratulations to NFFE Local 2086 for winning a quarter of this year’s IAM Photo Contest awards,” said NFFE National President Randy Erwin. “It is always great to see pictures of NFFE members carrying out their duties, especially when the photos are so profound and impactful like these. I look forward to receiving my IAM calendar, and hope our membership will consider supporting NFFE, the IAM, and Guide Dogs of America by purchasing their own.”