Yesterday, more than 100 Watervliet Arsenal employees hit the streets to demonstrate against 14 days of mandatory sequestration furloughs. The message was clear: federal workers have given enough already.

Organized by NFFE Local 2109, the informational picket targeted furloughs and other anti-federal worker policies initiated by Washington over the past several years. Joining them was Congressman Paul Tonko (D-NY) who stood in solidarity with arsenal employees facing furloughs. Leading the charge was Local 2109 President and NFFE National Vice President Tim Ostrowski:

“Furloughs are really going hurt people in our area,” said Ostrowski. “We have mortgages, car notes, rent, utilities, and lots of other expenses to pay. How can we be expected to make ends meet after a 12% pay cut overnight? It just doesn’t add up.”

The picket gained considerable attention from media outlets across central New York. Two different local news stations reported from the rally in addition to several newspapers from the surrounding region, including Albany, Troy, and Schenectady. In all, news from the rally reached hundreds of thousands of people with the message that federal workers have already done their fair share.

“This is the power of people standing up and saying enough,” said Ostrowski. “We’re tired of being ignored by elected officials in Washington, so we took our issue straight to the people – and they listened.” 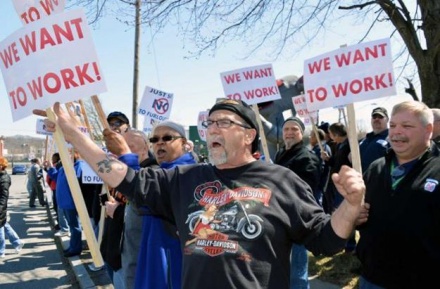