“We’re baaaack!” shouted Phil Neuenfeldt, President of the Wisconsin AFL-CIO, as he welcomed Union activists and supporters to the Capitol square in Madison on March 10th. Over 40,000 protesters marched on the anniversary of last year’s massive demonstrations objecting to Wisconsin Governor Scott Walker and Republican legislators stripping collective bargaining rights from public employees. But truth be told, the protesters never left. While the daily demonstrations were smaller, the real action was in gathering recall petitions for Governor Scott Walker and some of his key allies in the state senate.

Activists collected over a million signatures on petitions to recall Walker – almost double the number required by law. The recall election for Walker will be in June. Last year, recall petitions forced elections for a number of state senators, and while two anti-union legislators were given the boot, the anti-union element still maintained a one vote majority in the senate. However, that narrow margin has allowed some progress to be made as moderate Republicans are not as afraid to stand up for what is right.

NFFE Local members Steve Mauch, Joe Balczewski, Melissa Baumann, Larry Zehner, and John Obst joined in the anniversary “celebration.” Said NFFE VP Obst, “A lot of hard work will have to be done to defeat Walker, but we’re optimistic that it will happen.” He added that in addition to recalling Walker, four anti-union state senators also are facing recall elections. “How have the they responded so far,” asked Obst? “By proposing legislation to gut future recall efforts.” 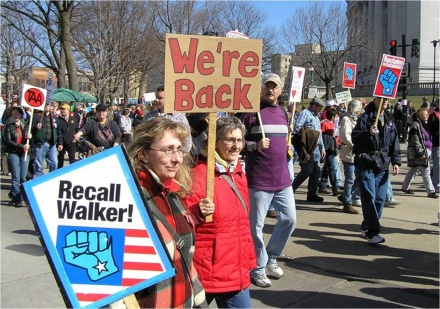