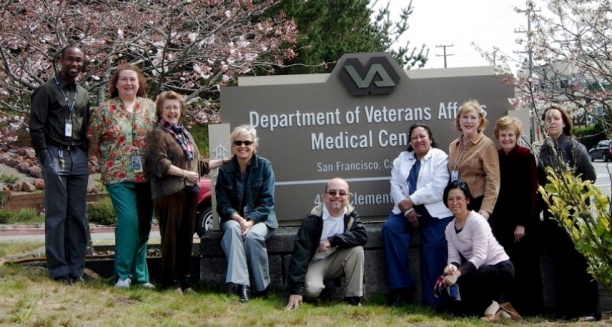 Members of NFFE Local One in front of the VA.

After a process that took two years, two nurses of the San Francisco Veteran’s Affairs Medical Center were granted well-deserved and long overdue compensation for unpaid work. Peter Scott and Edward Galvan, both of NFFE Local One, are PICIS experts, a software package which monitors severely ill patients in Intensive Care Units, Post-Anesthesia Care Units, and in the Operating Room.
The system is highly technical and requires that PICIS coordinators be on-call 24/7 for trouble shooting purposes. Scott and Galvan were asked to serve as 24-hour on-call coordinators in order to address emergency IT issues within the PICIS system, however, for six years both employees had been working evenings, nights, weekends, and holidays without compensation. Working “off the clock” is a clear violation of the Fair Labor Standards Act, and the two were, “permitted to suffer,” for working unpaid hours, as outlined in the FLSA.Patricia La Sala, National Vice President and Chief Steward of NFFE Local One, first heard of this violation in August of 2015, and immediately began working to ensure these exemplary nurses were properly compensated. La Sala reached out to numerous administrative staff in the VA’s Fiscal, Nursing, and Human Resources departments, however, Scott and Galvan were prevented of rightful compensation due to a problem within the pay system, Defense Finance and Accounting Services (DFAS).

La Sala was then advised by her office of legal counsel to file a grievance on behalf of the employees, which she submitted in November of 2016. The grievance was finally settled on March 14, 2017 and the San Francisco V.A. Medical Center agreed to pay Mr. Scott and Mr. Galvan back pay plus interest for the employees’ six years of unpaid on-call hours. It took over two years of diligent work by the Bargaining Unit for the two employees to be properly compensated, which amounted to over $100k, in total.

La Sala, speaking on the matter, stated that, “working in partnership with management is always a win-win. Management saw the inequity of this pay issue and worked with NFFE Local One for two years to see that these employees received back pay.”