NFFE Rallies on Capitol Hill; Dougan to Congress: Man Up and End This Shutdown

Yesterday, on a chilly, wet morning in Washington, D.C., NFFE-IAM members rallied with other federal employee unions to convey a clear message to a stubborn Congress: stop playing politics with federal employees’ lives and end the government shutdown.

With the government shutdown entering its 10th day, Dougan had stern words for Republicans in the U.S. House of Representatives who have refused to pass a clean spending bill that would re-open government.

“On many occasions I have heard Republicans in Congress claim to have good and honorable intentions of serving the people as they have gone about their business, but I find no honor in continuing to lock out hundreds of thousands of federal employees who want nothing more than to go back to work and serve the American people,” said Dougan. “Nor is there honor in continuing to allow political differences to be the excuse for denying services and inflicting pain on those who are most vulnerable and in need of support – the young, the elderly, the sick, the poor, and our veterans and their families.”

Dougan’s most pointed comments, however, seemed to be aimed more at Congress as an institution – an institution that is so caught up in political gamesmanship that it is failing to do the business of the American people.

“It is time to dispense with the political grandstanding, the petty bickering and the finger pointing. It is time to check the egos at the door and work together to fund government and put all federal employees back to work,” said Dougan. “It is time to man up and end this shutdown.” 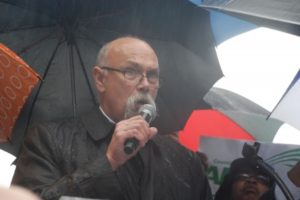