President Obama Thanks Some Federal Employees

On Tuesday, President Obama addressed nearly 3,000 members of the Senior Executive Service (SES) and other leaders in the federal workforce. Speaking to a crowded room, Obama sought to thank the dedicated federal workforce, and to empathize with the recently-tumultuous environment they have operated in that has led to declining workplace satisfaction among federal employees.

“My message here is simple,” President Obama said. “Thank you. I’d like to come bearing raises and perks. But I can’t. But what I can do is tell you how important you are, not just to me, but to the country.”

While Obama announced three new initiatives to move towards reforming and keeping the federal workforce competitive in recruiting and retaining top talent, the speech was largely intended as a morale booster. Among those in attendance was NFFE National President William R. Dougan, who appreciated the President’s gesture of thanks.

“With federal employees being forced to endure a three-year pay freeze followed by pay adjustments that failed to keep up with inflation, on top of a historic government shutdown and increased pension contributions, it is no wonder federal employee morale continues to drop,” NFFE National President Dougan said. “That said, it was nice to see the President take the time to thank some federal employees for their dedication through this recent string of difficult times.”

As for the newly-announced initiatives, President Dougan made clear in an interview with Federal News Radio that the most important value of these initiatives will be found in their outcomes.

“Conceptually, a lot of this may be sought with good intentions,” said NFFE National President Dougan. “But the real proof is going to be how these initiatives are developed, implemented and what kind of outcomes they achieve.” 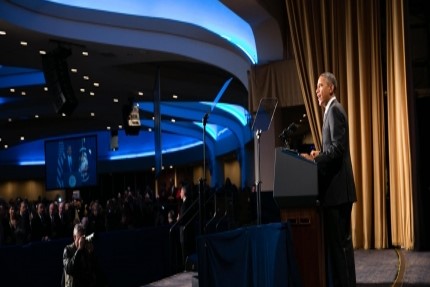