As the presidential campaign kicks into high gear, the issues at the front of most voters’ minds are job growth and the economy. What many don’t realize at the moment is just how close the country is to taking a major hit to the employment rolls.

If sequestration – the automatic $115 billion reduction in government funding mandated by the failure of the Congressional Super Committee – is allowed to take effect this year, a total of 2 million American jobs could be lost. According to a new report released by the Aerospace Industries Association, federal employees would take a disproportionate share of the punishment with a whopping 277,000 jobs lost.

The sequestration cuts resulted from the failure of Congress to reach a ten-year, $1.2 trillion deficit reduction agreement in November of last year. With a $56.7 billion reduction to defense spending and $59 billion in reductions to non-defense spending, federal agencies throughout government are slated to take a huge hit to their bottom lines. Most of the job losses – roughly 220,000 – would take place at non-defense agencies, the report concluded.

“We can’t continue to allow Congress to heap the burden of deficit reduction on the backs of federal employees every time they fail to do their job,” said NFFE National President William R. Dougan. “These workers have families that need to be fed, cars that need gas, and rent to be paid. The political gamesmanship that has dominated the debate these past two years is hurting real people. The time for politics is over. Let’s roll up our sleeves and start working toward a solution.”

These massive cuts will devastate the federal workforce if nothing is done to prevent the sequester. In an effort to come up with alternative ways to reduce spending, Senator Jeanne Shaheen (D- NH) and Senator Kelly Ayotte (R-NH) are working on a bipartisan plan together before sequestration takes effects and before elections when companies have to give layoff notices. NFFE is actively engaging Congress and the Administration to explore options for preventing the draconian cuts and protecting federal jobs. 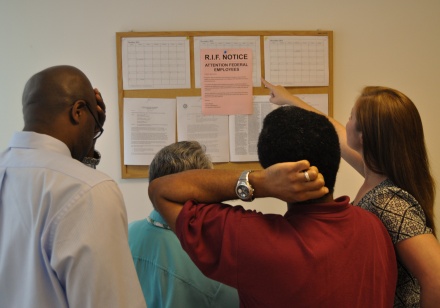