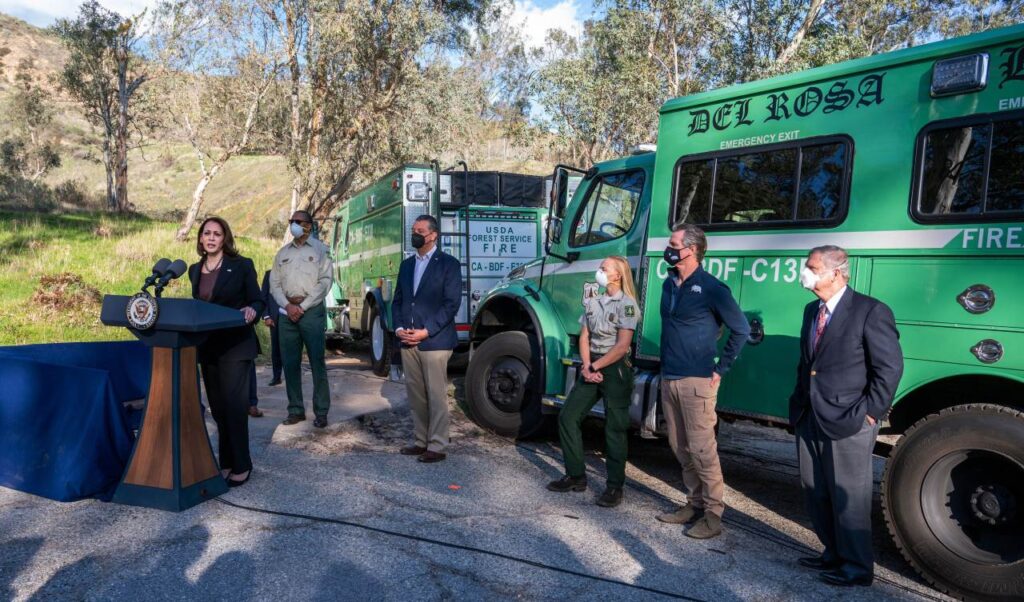 Last week, Vice President Kamala Harris and Agriculture Secretary Tom Vilsack made a trip to San Bernardino, California to highlight the Biden-Harris Administration’s commitment to providing resources that will help protect the state from the ongoing wildfire crisis. Speaking at the U.S. Forest Service’s Del Rosa Fire Station, the Vice President announced that California will receive $600 million to assist the Forest Service’s efforts to recover from the severe fires of 2021 and to prepare for the upcoming fire season. The additional funding is separate from the $5 billion that was allocated for wildfire preparedness as part of the bipartisan infrastructure bill that was passed in November.

After California experienced its worst fire season in 2020 and another severe season last year, the White House understands that mitigation is essential in fighting wildfires. “It is about recognizing that we cannot, as a government or as a society or people who care, only respond in reaction to a moment of harm or danger,” said Vice President Harris. “We must also be able to use technology and common sense and the expertise of those on the ground to understand we have the tools to predict these wildfires ahead of time.”

Before speaking with the media, VP Harris took an aerial tour above the San Bernardino National Forest, the site of the 23,000 acre El Dorado fire, which sadly caused the death of Charles Morton, a Big Bear Hotshot firefighter. To prevent fatal fires such as El Dorado, NFFE is working with the Biden-Harris Administration as well as Congress to ensure officials understand the seriousness of the wildfire crisis and how to best address the situation.

“As we gear up for what is expected to be another severe fire season, it is crucial that the government takes strategic action right now to help mitigate the wildfire crisis,” said NFFE National President Randy Erwin. “We are grateful that the bipartisan infrastructure package provides resources for our wildland firefighters, including funding for salaries, forest rehabilitation activities, and the reduction of hazardous fuels. However, we know that the wildfire crisis is not slowing down any time soon, so these additional resources for the state of California are appreciated. NFFE is committed to working with the White House and Congress to make sure our wildland firefighters have everything they need to prepare for the upcoming fire season.”