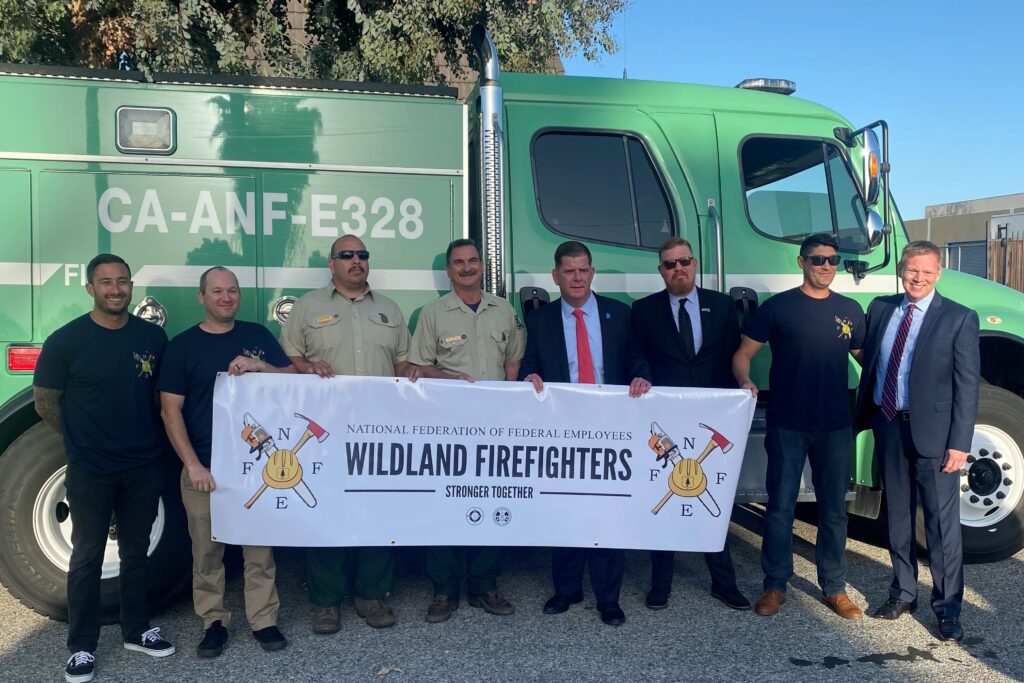 Washington, DC – Today, the National Federation of Federal Employees (NFFE) and the International Association of Firefighters (IAFF) join Labor Secretary Marty Walsh and Department of Labor (DOL) officials in Los Angeles as they announce changes to the Office of Workers’ Compensation Programs (OWCP) for federal firefighters. Over the past several months, NFFE and IAFF have been urging DOL to establish a special claims unit to address the unique challenges that federal firefighters have been faced with in submitting claims and receiving adequate healthcare.

“We are grateful for Secretary Walsh’s leadership and for the efforts of OWCP Director Godfrey in getting the special claims unit across the finish line,” said NFFE National President Randy Erwin. “Secretary Walsh and his team understand just how important this issue is for our members and federal firefighters across the country. Today, we thank them for delivering on behalf of our nation’s brave public servants who risk their lives combatting the wildfire crisis.”

From exposure to hazards while working on the frontlines of wildfires, federal firefighters are at risk of developing cancer and other diseases at a rate much higher than the general population. According to the DOL, OWCP receives approximately 2,600 workers’ compensation claims from federal firefighters every year. Of those, about 175 claims include conditions such as cancer, heart disease, and lung disease. However, federal firefighters have had significant difficulties in receiving compensation and healthcare for injuries sustained while on the job.

To better address the specific needs of federal firefighters, DOL has established new policy changes as listed in the bulletin, “Special Case Handling in Certain Firefighter FECA Claims Processing and Adjudication.” According to a DOL release, “OWCP has created a special claims unit to process federal firefighters’ claims. The unit consists of existing staff specifically trained to handle these claims. The agency is also providing comprehensive training to the unit’s examiners on the impacts of the policy changes, and working with federal agencies including the departments of Agriculture, Defense, Homeland Security and Interior to explain the changes in policy and procedures.”

“It is critical that the government ensures our federal firefighters have access to proper healthcare and receive compensation for treatment related to occupational injuries and illnesses,” continued Erwin. “The policies announced today will go a long way to help firefighters who have been injured or developed illnesses from protecting the country and their neighbors from fires. NFFE is proud to have been involved in this effort and we look forward to continuing to reform workplace standards for federal firefighters.”