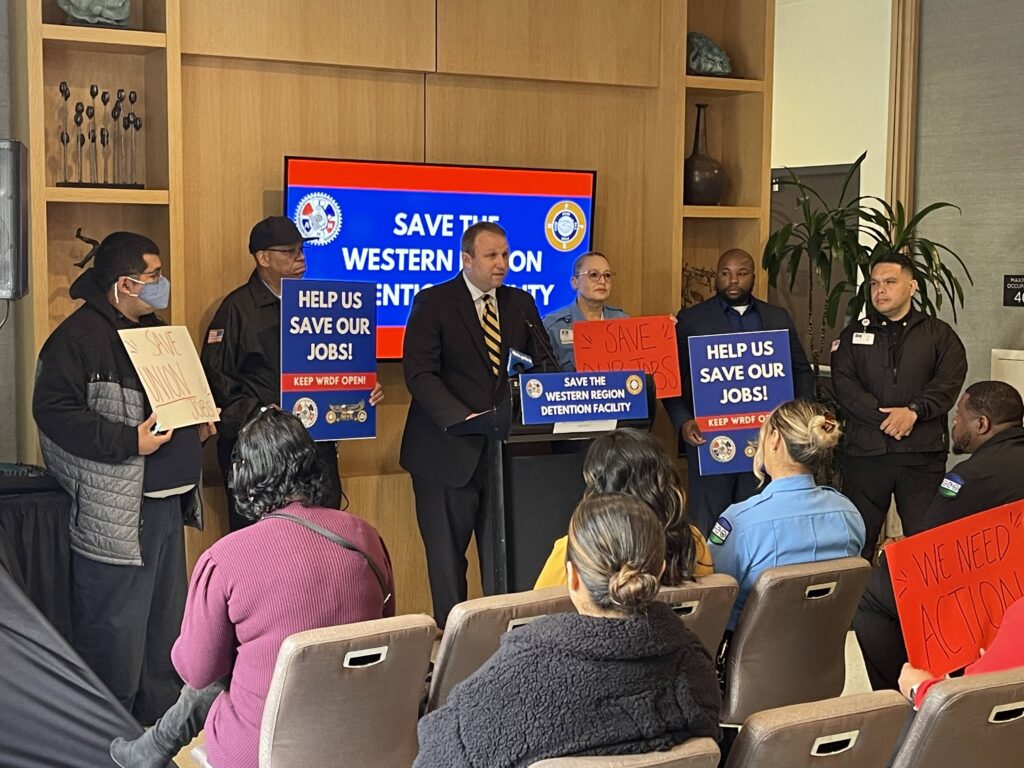 San Diego, CA. –  Today, the National Federation of Federal Employees (NFFE) is publicly calling on the Biden Administration to save the Western Region Detention Facility (WRDF), a resource that is essential to public safety in Southern California. The facility is currently operating on a U.S. Marshals Service (USMS) contract that was first extended six months by the Biden Administration to terminate on April 1st. Last Friday, the Biden Administration made the decision to extend the contract another 90 days, which will keep the facility open until the end of June. If facility is shuttered, 300 union workers, including officers, nurses, doctors, teachers, counselors, and other support staff will lose their livelihoods. Further, because there is no suitable alternative detention space in the region, those standing trial in San Diego would be detained primarily in Victorville, California, a seven hour round trip drive on most days, which will unquestionably make the criminal justice system worse, not better.

“Make no mistake, the closure of the Western Region Detention Facility would be devastating to the people of San Diego and the surrounding areas,” said NFFE National President Randy Erwin. “It is crystal clear that closure of the facility would only hurt the population it is presumably trying to help. The executive order prompting this potential closure is supposed to improve the criminal justice system, making it more fair for the poor and people of color, but this closure accomplishes the exact opposite. For those detained awaiting trial, instead of being held locally, near to the courthouse, their legal counsel, and family, now they will be detained hours away. It’s just not fair.”

“Closure of the WRDF would also result in negative consequences to the local economy,” continued Erwin. “These are 300 good union jobs and some of the highest paid in the area. The facility brings in $30 million annually in direct economic activity. The fallout of a closure would be felt far and wide. The whole San Diego community would feel the pain of this closure.”

“I remain optimistic that we will get a longer-term contract keep the facility open and save our members’ jobs” explained Erwin. “I believe that under President Biden’s leadership, this Administration wants to support workers, and preventing a closure is a clear way it can support workers. I believe that letting this closure happen would be out of his character for this Administration, which has already allowed a facility facing closure last year in Ohio to remain open. Also, nothing is going to change in the next 90 days when it comes to the availability of detention space. Public detention space is not available in the San Diego area. The reasonable approach here is to keep the Western Region Detention Facility open.”