Back for More: National Newspaper Smears Federal Workers with Another Misleading Article on Retirement Benefits

For the past several years, the nation’s most widely circulated newspaper, USA Today, has published high profile stories disparaging the pay and benefits of federal employees.

One story claimed federal employees earn double that of workers in the private sector despite conclusive Bureau of Labor Statistics reports confirming federal workers earn 26% less than their private sector counterparts. Another claimed that the number of federal employees earning $150,000 per year exploded under President Obama, without accounting for the fact that the GS 15 Step 10, the governments pay cap, barely crept past the $150,000 milestone due to a 2% pay increase endorsed by Congress the year before.

This week it appears that these anti-federal worker reporters are back to their old ways with a new story exposing the “handsome rewards” received by federal retirees. The story focuses on the 1.2% of federal retirees with pensions exceeding $100,000. In the story, author Dennis Cauchon explains briefly that those receiving these high pensions are primarily top agency leadership, doctors, lawyers, and scientists, but quickly transitions to fear tactics on federal retirement benefits generally. At one point, he says:

“Pensions are a growing federal budget burden, rising twice as fast as inflation over the last decade. Pension payments cost $70 billion last year, plus $13 billion for retiree health care. Taxpayers face a $2 trillion unfunded liability — the amount needed to cover future benefits — for these programs, according to the government’s audited financial statement.”

This may paint a bleak picture of federal retirement, but there are some serious omissions that undermine his argument. While retirement costs for the federal government are increasing in the short term, this will fall sharply once Civil Service Retirement System (CSRS) retirees cease collecting pensions. Once the next generation of retirees, hired under the Federal Employee Retirement System (FERS) begins drawing their pensions en masse, costs will decrease substantially. This is because the FERS pension benefit is half that of the old CSRS system – a fact Cauchon neglects to mention in his story. In fact, the average annual pension benefit for FERS retirees is just $12,800, a small fraction of the $100,000 pensions described in the story.

The other problem with Cauchon’s characterization of the federal retirement problem is the idea of a “$2 trillion unfunded liability.” This is simply not true. In fact, according to a recent report by the Office of Personnel Management (OPM) the Federal Employee Retirement System (FERS) was not only fully funded – it was running a $12.2 billion surplus in 2010 (the latest year which information is available). Cauchon is simply misleading people about the health of the federal pension system.

“The fact of the matter is that some people in Congress and the media will stop at nothing to paint federal employees as greedy, underworked bureaucrats,” said NFFE National President William R. Dougan. “The reality is that federal employees keep our food safe to eat, our skies safe for flying, our military prepared for combat, and countless other indispensable services. Federal employees are the backbone of this nation and it’s about time these muckrakers understood that.”

This article is one of thousands of anti-federal employee smears that populate the newspapers, airwaves, and internet. Until we respond, rebut, and expose these attacks as unfair, federal employees will continue to face scrutiny from Congress and our fellow Americans. We need to stand up and make our voices heard in the media and Congress. Visit our Legislative Action Center and Communicators Toolkit to find out what you can do to stand up for yourself and your fellow federal employees. 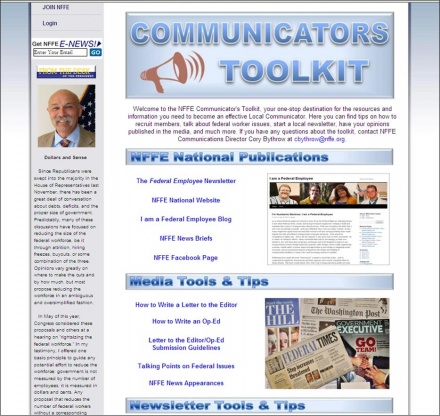