Call Congress to say No to the Federal Pay Freeze for 2021! 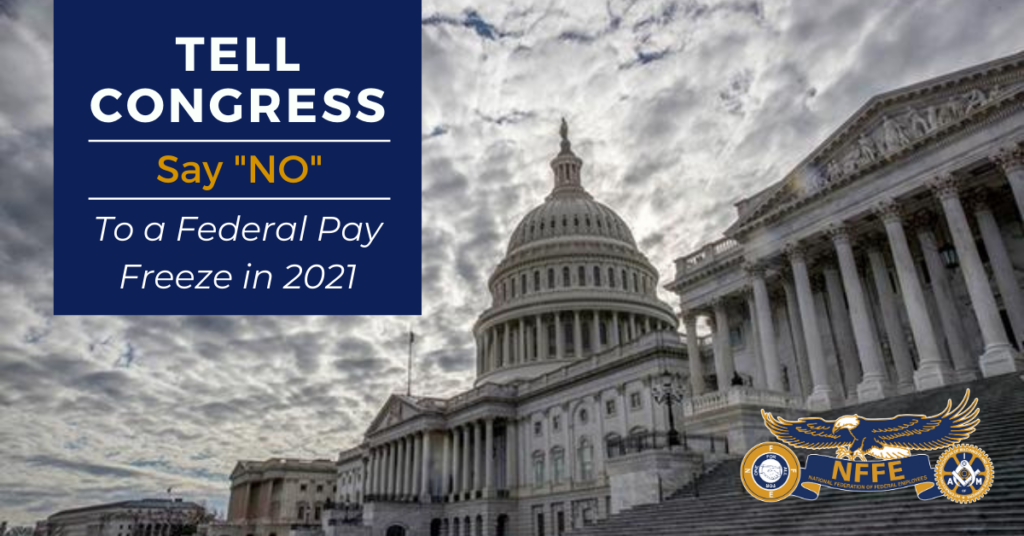 There is a lot of uncertainty going into the last few weeks of the 116th Congress of the United States but one issue very clear to federal employees and their families is that workers cannot afford a pay freeze for 2021.

At the moment, several legislative remedies exist to promote a pay raise for 2021 but time and options are running out.  Whether Congress passes an omnibus appropriations bill or passes a Continuing Resolution to avoid a shutdown by December 18 at midnight, federal employees should contact their House and Senate offices to insist upon a pay increase, and say No to a Pay Freeze.

NFFE and other labor unions requested a 3% pay parity increase for 2021.  That request was honored by the House Oversight Committee Democrats and Senate Democrats, however the 3% pay parity deal was lost to predominant politics that aim to keep federal salaries low.  Now we are fighting for the 1% increase that automatically kicks in provided Congress passes no legislation mandating a pay freeze.  Currently, the Senate Appropriations Omnibus bill mandates a pay freeze.

Call or write a letter to your House and Senate offices to support blocking any language that mandates a pay freeze so that the 1% increase allowed in current law can take effect in January.  See the NFFE Action Center to send a prewritten letter to your House and Senate offices.  NFFE will continue to negotiate with Congress and the White House to fight a pay freeze for federal employees which, as we know too well,  could not come at the end of a worse year.