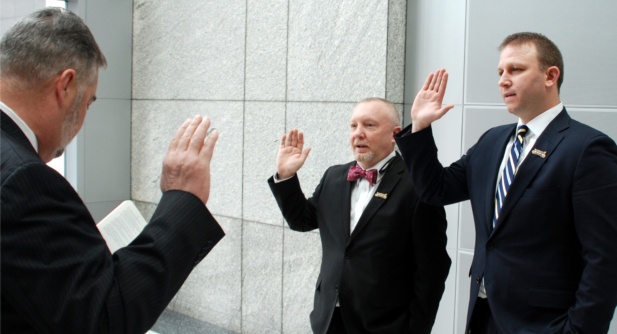 On Dec. 16, 2016 in Upper Marlboro, Maryland, the National Federation of Federal Employees (NFFE) celebrated a changing of the guard as incoming NFFE National President Randy Erwin and National Secretary-Treasurer David Stamey were sworn into office.

IAMAW International President Robert Martinez, Jr. performed the honors in a small ceremony at IAM Headquarters. Erwin previously served as NFFE National Secretary-Treasurer and Stamey National Business Representative from the Southern Region. Both Erwin and Stamey were elected to their positions at NFFE’s 50th Convention in Orlando, Florida last September. The swearing in coincided with retirement of outgoing NFFE National President William Dougan.

“I am humbled and grateful for the opportunity to serve as national president of the National Federation of Federal Employees, America’s first federal employee Union,” Erwin stated.  “NFFE is in its 100th year representing our nation’s dedicated and exemplary federal workforce. Through war and other uncertainty, the members of this Union have continually protected, preserved and inspired the foundation from which the greatest democracy on Earth flourishes. We are proud of our history and we are committed to continuing that legacy for centuries to come.”

While cognizant of the historic nature of leading NFFE in its centennial year, Erwin also emphasized tremendous challenges ahead for the federal workforce in the New Year and beyond.

“Many federal employees are on edge right now because of the awful proposals being put forth by members Congress and others that will hurt federal workers and working families,” said Erwin. “There are a lot of politicians out there intent on penalizing federal workers by cutting pay, benefits, workplace protections, and jobs. The worst part of it is that these are attacks are mostly politically driven. But NFFE will not back down from the fights we have ahead. We are going to protect federal workers from politicians trying to scapegoat them for their own failures. NFFE-IAM members work for America every day, and we will demand the respect and fairness that federal employees deserve. Together we will take on every challenge that comes our way.”

The commitment to overcome adversity impressed upon the federal workforce is echoed by Stamey.

“I am honored to serve the NFFE-IAM membership as National Secretary/Treasurer,” Stamey said. “We have a lot of work to do, but no matter what adversity the membership of this Union faces, we will meet that adversity with force and conviction.”