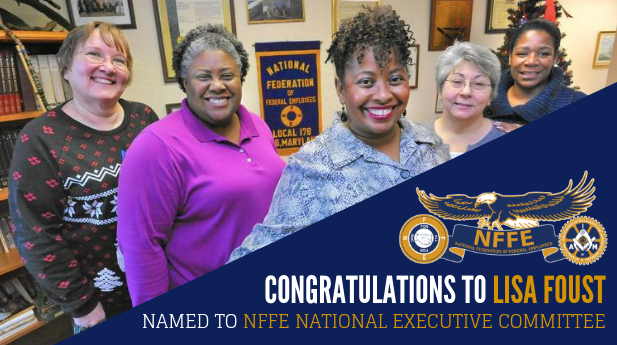 The National Federation of Federal Employees (NFFE) is proud to announce that Lisa Foust, president of NFFE Local 178 has been appointed as a member of NFFE’s National Executive Committee (NEC).

In September, NFFE announced and accepted applications for the vacant NEC position. On February 25, 2019, Foust was put forth by NFFE National President Randy Erwin as a nominee for the position, and her appointment was confirmed unanimously by the NEC.

Lisa begins her term immediately, and in her usual style, is sure to take on her new role with confidence and enthusiasm.

“I would like express my sincere gratitude to Randy and NEC for believing in my abilities by choosing me to serve. As an African American woman appointed to the NEC, I look forward to bringing pride, strength, unity, and diversity to the committee,” said Lisa after being informed of her confirmation.  “I believe my pride in being a federal employee, strength of more than 30 years of experience, unity of being able to work well with others, and the diversity of my thoughts will have a positive impact on the committee and the great things we will continue to accomplish. As a twenty-year NFFE-IAM member, I am prepared to represent the DOD community in an honest and transparent fashion and am excited to work hard to fight for NFFE-IAM members!”

In addition to the NEC, Lisa currently serves as the Secretary Treasurer for the MD/DC State Council of Machinists and is a delegate for the Metropolitan Baltimore Council AFL-CIO. She also has served as the NFFE National Representative for the Army Labor Management Forum and was recently reappointed to the 2019 Planning Committee for the Machinists Non-Partisan Political League.

“I am very proud that Lisa will be serving on NFFE’s National Executive Council,” said Randy Erwin, NFFE National President. “She has been doing great things for NFFE Local 178 for many years. In recent years she has aspired to earn a position on NFFE’s NEC and now she has finally accomplished that. I am really looking forward to having her voice present and involved for the important decisions that are made by the NEC. I know the NFFE-IAM membership will be very well-served by Lisa performing in this capacity. Congratulations, Lisa!”