On August 27, 2014, the Department of Labor (DoL) announced that the Treasure Lake Job Corps Center was targeted for closure. The announcement caught the Treasure Lake community by surprise, and NFFE 1840 sprang into action to protect the facility that employs NFFE-IAM members.

In an effort spearheaded by NFFE Local 1840 President, Lance Hamann, NFFE-IAM members quickly turned to the community to begin a campaign to save Treasure Lake. Hamann, along with members of 1840, NFFE’s Forest Service Council and NFFE National Staff, worked together to plan a campaign to build a coalition of community leaders, members, and organizations urging DoL to keep the doors open at Treasure Lake.

The mission of the Treasure Lakes Job Corps Center is to provide education and vocational training to at-risk youth in the region. The Center serves over 100 students at various stages of training, all of whom come from different regions of the country. Additionally, the Center pumps $5 million into the Indiahoma, OK regional economy annually while employing 50 members of the community on staff.

“We feel that the Department of Labor is not taking that aspect of who we are into account whenever they start looking at their numbers,” said NFFE Local 1840 President Hamann. “We were at the Hurricane Katrina cleanup. That type of community service is not taken into account [when evaluating a Center]. So for a long time we have felt that there needs to be another look taken at how those statistics are used when applied to a [Center].”

Hamann and coalition leaders say that a recent string of weak reviews of Treasure Lake can largely be traced back to unstable and inconsistent management. Over the past decade, the federal agency in charge of managing Treasure Lake has changed three times. Concurrently, 10 different center directors have been assigned to Treasure Lake in the last six years. As recently as September 1, Treasure Lake again changed hands to a new acting director. The swapping of leadership has resulted in unclear expectations, rules and standards. As a result, without a clear leader or direction, the employees at Treasure Lake are victims of significant mismanagement.

The campaign remains underway in Southwestern Oklahoma to save Treasure Lake. Local media has focused heavily on the campaign, with literature and information being distributed by the coalition every day on how members of the community can join the coalition fighting to save Treasure Lake. For more information on the effort, visit www.nffe.org/ccc. 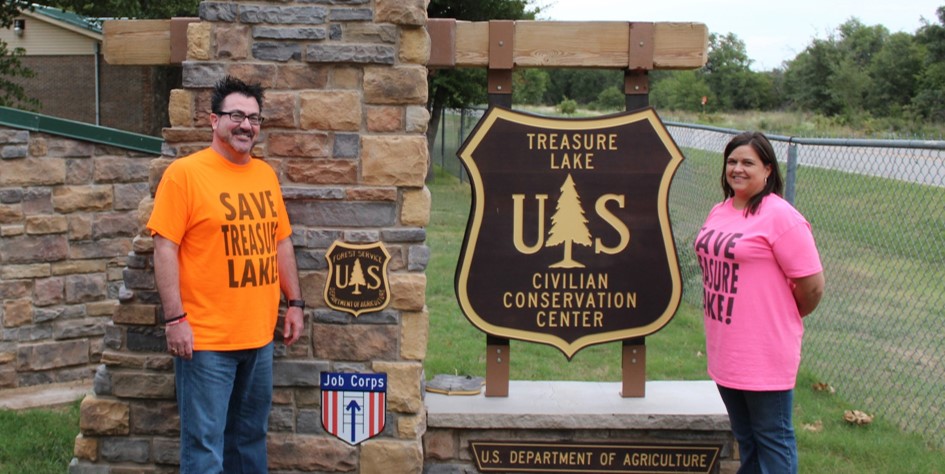