On behalf of the National Federation of Federal Employees (NFFE) and the 110,000 federal employees our union represents throughout the United States and abroad, I am writing to urge you to vote “No” on H.R. 6684, which is expected on the House floor today.

H.R. 6684 would require massive increases in contributions to pensions for current and future federal employees. Specifically, the language in this bill would require both FERS and CSRS civilian federal employees to divert an additional 5% of take-home pay toward their pensions – phased in over a five-year period – with no additional benefits to employees. This change amounts to both a pay cut and a retirement benefit cut for federal workers, as a decrease in take-home pay has a direct impact on one’s ability to save for retirement.

Any way you look at it, this provision is highly unfair to federal workers. This 5% cut amounts to a targeted tax on middle class federal employees, a group that has already contributed $103 billion toward deficit reduction in the last two years – more than $50,000 per federal employee.

The proposed pension cut is an unconscionable change considering the average annual pension benefit for FERS retirees is just $12,780 per year. Despite the best efforts of some to characterize this as a “bloated” pension, the fact is federal retirees receive a modest benefit for their service to the American people, and gutting this critical benefit will make it very difficult for federal agencies to recruit and retain the talented and skilled workforce necessary to carry out agency missions.

Federal employees and their families are struggling just like everyone else in this tough economy. Targeting this group of middle class Americans again – this time to strip federal workers of their retirement security – should be unthinkable. It is time to find other ways to reduce the deficit than continually taking from middle-class federal workers who dedicate their lives to public service. 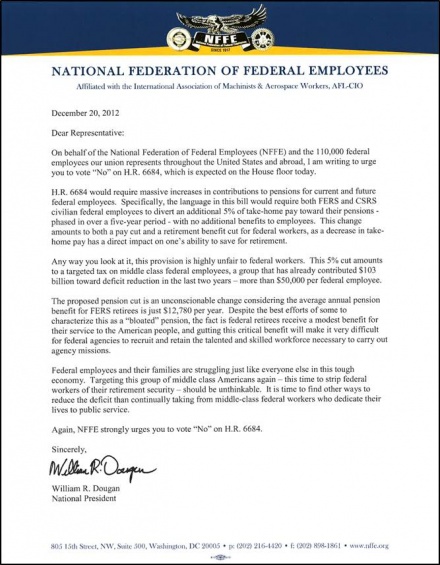