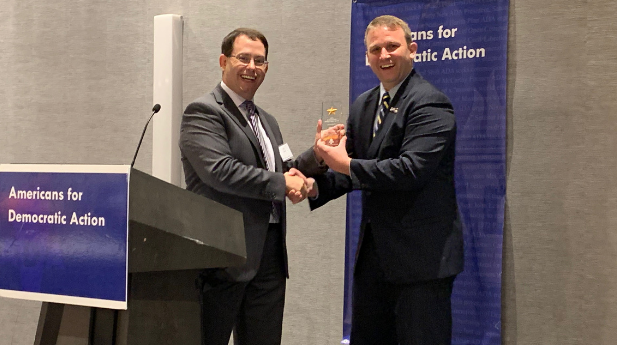 “I would like to thank ADA for bestowing this award on America’s 2 million dedicated and talented federal employees,” said President Erwin in his address. “I also thank ADA for choosing the National Federation of Federal Employees, America’s first federal employee union, and proud affiliate of the Machinists Union and AFL-CIO, to receive this award on behalf of federal workers everywhere.”

In his address, President Erwin discussed the amazing work performed by federal employees throughout the country. “I must tell you, I am in awe of the tremendous work that federal employees perform for this country every day,” said Erwin.

The awards reception also served as an opportunity to thank the multitude of organizations that stood with federal employees during the 35-day government shutdown, many of whom were in attendance that night. “I want to thank everybody in this room and everyone across the country that stood shoulder-to-shoulder with us during this shutdown fight. Federal workers and their unions were on the front lines, but we would not have prevailed without the tremendous support of unions and progressive organizations of all kinds. You were right there with us every step of the way, and we thank you!”
President Erwin ended his address by commenting on the significance of receiving the Reuther-Chavez Workers Right award, calling Reuther and Chavez “titans of the Labor Movement” who were able to “grow their unions and to grow the collective power of their members.” Erwin concluded, “No matter what organization you are with, never forget the need to organize – to talk to people one-on-one; to win the hearts and minds; to build an Army of people that are behind you on whatever issues you have; to build membership, to build resources, to build engagement, and ultimately, to build power.”
Become a Member
NFFE Toolbox
Advocacy
Tweets by NFFE_Union