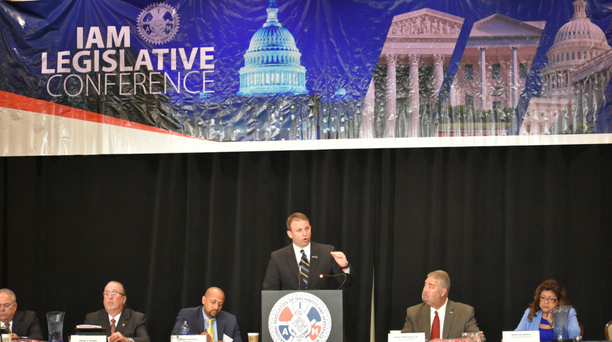 The NFFE-IAM 2018 Legislative Week proved a huge success this week as NFFE members came to Washington, D.C. to fight for the financial and employment security of federal workers.  Members from many departments and agencies attended more than 150 appointments with senators, representatives, and their staff over a four-day span.

Notable achievements include continuing progress on “6c” legislation which allows duty-injured first responders to keep their retirement plan and contributions, and gaining Congressional commitments to prevent the privatization and closure of Job Corps centers ran by NFFE Forest Service workers.  Members from the Red River Army Depot garnered support for more workload, and all members fought off a shameless attempt by the director of OPM to slash federal retirement that included eliminating COLAs, eliminating the FERS Supplement, and increasing employee contributions while decreasing annuities for retirees and survivors.

During the week, NFFE and IAM members gathered at the Hyatt Washington D.C. where National President Randy Erwin addressed the crowd along with IAM International President Robert Martinez and many members of Congress.  On Wednesday evening, an impressive reception allowed members to socialize face-to-face with numerous U.S. Senators and Representatives who were in attendance.

The week started on Sunday with a beautiful welcome reception at the home of Secretary-Treasurer David Stamey.  On Tuesday evening, members attended a special reception at AFL-CIO headquarters where several NFFE Locals received organizing awards for 2017, and Patricia La Sala of Local 1 received the NFFE Lifetime Achievement Award.  The week capped off with a very tasty barbecue at the home of President Erwin under the culinary offerings of NFFE grill master Roosevelt Littlejohn.

“Legislative Week defines us as a Union, and it serves as a visible show of strength and unity,” stated NFFE National President Randy Erwin.  “It is hard work walking the halls of Congress day after day but what we accomplish when we come together is spectacular, as we saw this week.  I am very proud of our members who stormed the Hill this year, refusing to be intimidated by anyone who threatens the financial and employment security of federal workers.  This is what the NFFE family is all about.”
PRINT VERSION
Become a Member
NFFE Toolbox
Advocacy
Tweets by NFFE_Union