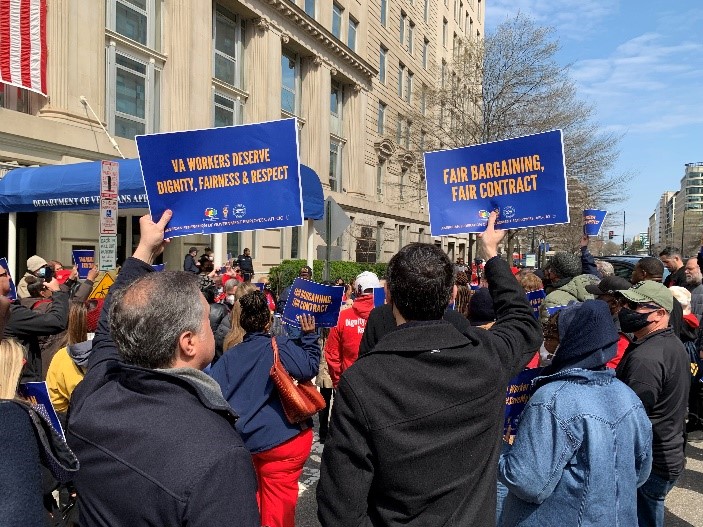 The National Federation of Federal Employees (NFFE) joined the American Federation of Government Employees (AFGE) during their legislative week at a rally outside the Department of Veterans Administration (VA) headquarters to protest the recently released report from the Asset and Infrastructure Review (AIR) Commission.  The report, a product of the AIR Commission which was created during the last presidential administration, recommended the closure or transfer of 35 VA medical centers across the United States.  While the report also recommends building some new buildings, the overall impact is less availability of VA facilities across the country, a goal that aligns with those who seek the privatization of VA medical care.

The report itself is criticized for being hastily assembled, drastically underestimating the complexity of VA medical care and the struggle to provide services across the country.  NFFE agrees with AFGE and the other VA unions that the report and its recommendations do not hold merit as a legitimately researched document and must be withdrawn by the new members of the AIR Commission appointed this year.

An entirely new report is necessary, one that considers the lessons recently learned during the COVID pandemic, that considers properly staffed and funded VA assets, and that realizes the true liability and effect of expanding VA services via second-rate privatized medical corporations.  Described as a ‘huge middle finger’ to veterans, NFFE stands in solidarity with its VA union partners AFGE, the National Nurses Union, and the National Association of Government Employees, to move the AIR report to the trash bin.

Today, the report recommendations are far from being implemented.  The AIR Commission must hold public hearings and then submit finding for review to the VA secretary, then it must go to the Congress for a final vote.  From there, changes in authorizations and appropriations will have to occur before assets and people are directly affected.  However, in large bureaucracies like the VA, often small, quiet steps are taken ahead of congressional permission and authorized funding.  It will be left to the VA unions to watch for this, speak up, and act.