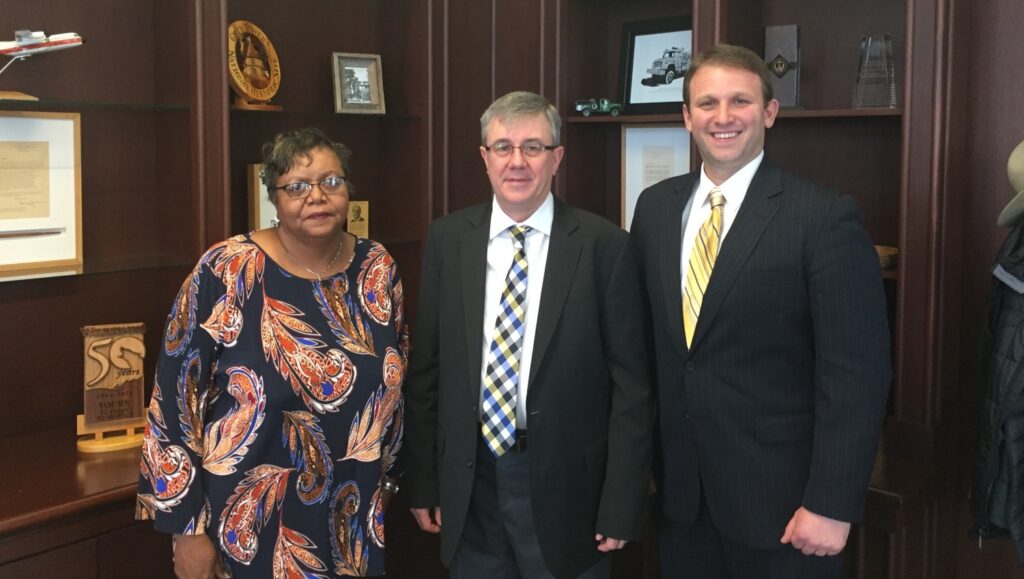 Yesterday in Washington, D.C., a delegation of NFFE leaders met with Tony Tooke, director of the U.S. Forest Service to discuss the future of Civilian Conservation Centers (CCC) and the Job Corps program. In attendance for NFFE was Forest Service Council Vice President Beverly Tobin Ford, Executive Director Steve Lenkart, and National President Randy Erwin. NFFE’s message to the chief was simple and direct: join NFFE in protecting the CCCs from the senseless closures being driven by the Department of Labor (DoL).

In recent years, DoL has dramatically scaled back funding for the federally-run CCCs – where NFFE-IAM members work – while maintaining higher levels of funding for privately-run contractor Job Corps facilities. The result has been disastrous for the CCCs, which have been forced to operate well under their capacity. A number of CCCs have been so adversely impacted by the cuts that they have been marked for closure, dealing a tremendous blow to the employees that work at those CCCs and the communities in which they are located.

“One of our key goals in meeting with Chief Tooke was to make it very clear that NFFE was not going to accept the CCCs being eliminated one by one the way they have been in recent years,” said NFFE National President Randy Erwin. “We will be advocating to Congress, the Administration, and others, to preserve and invest in the CCCs, which provide numerous critical services to the American people. Further, it is our hope that we will have a true partner in Chief Tooke in fighting for the CCCs.”

Chief Tooke, a career Forest Service employee who has served as Chief since August of 2017, took the opportunity in sitting down with NFFE leaders to discuss some of his priorities for the CCCs. Of particular interest to Chief Tooke was the importance of increasing safety for students and staff at CCCs across the country. NFFE leaders gladly volunteered to work in partnership with the Forest Service to address safety concerns and other key issues at the CCCs.

“Overall, we had a really productive meeting with Chief Tooke,” said Erwin. “We congratulate him on his appointment as Chief of the Forest Service, and we look forward to continuing an open and cooperative relationship in the coming years. Our true hope is that Forest Service will work with us to go out and get the CCCs the resources they need operate and thrive; that will be good for the Forest Service, for NFFE-IAM members who work at the CCCs, and most importantly, good for the American people.”