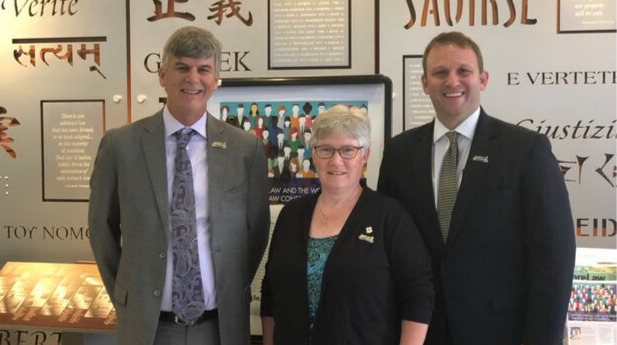 “If I had to give a letter grade on how the Trump Administration has managed the federal workforce, that grade is an F,” said President Erwin during a 12-minute presentation to attendees about the status of federal labor-management relations under the current administration. “In my view, this Administration, in both their policies and their rhetoric, fail to show civil service federal employees the respect they deserve. That lack of respect for federal workers has led to some really bad policies that demoralize federal workers and ultimately cheat taxpayers out of the critical services they deserve.”

“Under the Obama Administration we saw the agency pushing telework,” said Baumann. “People want to telework because there are often fewer distractions when teleworking, workers are able to get more work done, and data shows they are higher performing and more satisfied with their jobs. These programs matter to people. In this time of assault on federal employees, the union is protecting telework and other programs critical to maintaining work-life balance. Unfortunately, the playing field is so biased that it is an uphill battle.”

NFFE’s final presenter at the conference was NFFE General Counsel Jeff Friday, who chaired a panel discussion on recent rulings by the Federal Labor Relations Authority (FLRA) under President Trump, and the effect of those rulings on federal sector arbitration.

“I thought it was a very useful exercise to breakdown in detail just how broken the FLRA has become under this Administration,” said Friday, noting that some of the Trump-era FLRA appointees were in the audience. “A biased and dysfunctional FLRA makes effective labor-management relations all but impossible. I was glad to be able to give our views directly to some of those responsible for causing damage to the process.”