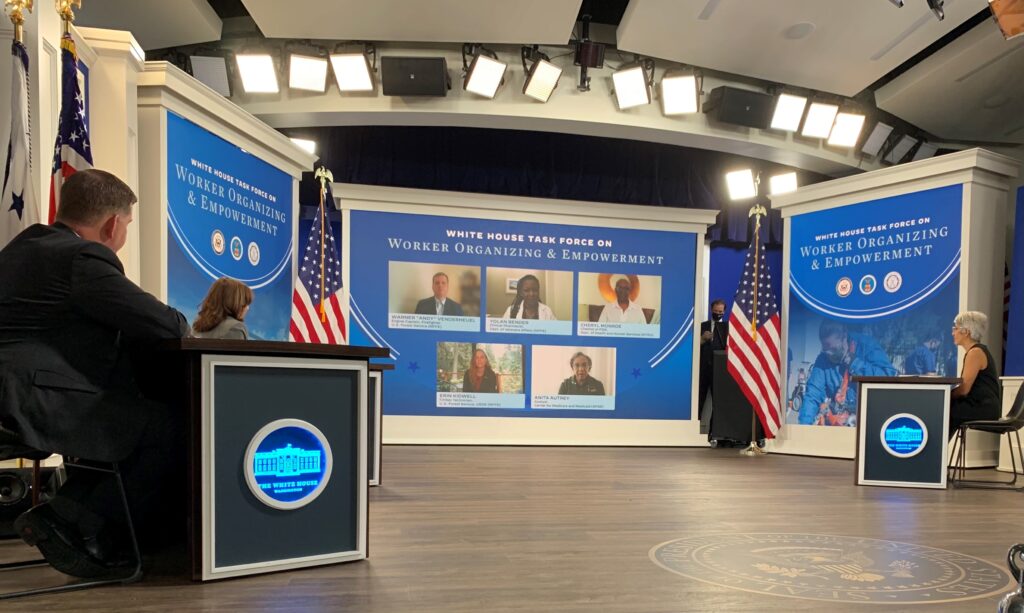 Vice President Harris illustrated the Administration’s vision for a stronger federal workforce, which includes requiring federal employers to educate new hires and applicants about unions and which union they would have the opportunity to join. In addition, during the onboarding process, unions will be allowed to participate in new employee training sessions. The initiatives will also mandate that federal agencies better communicate collective bargaining rights to current employees and provide contact information for the union if the employee is not yet a member.

Aside from the Vice President voicing her plans to fortify the federal workforce with unionization, NFFE-IAM members were invited to share how their union membership with NFFE had a positive impact on their careers in the federal government.

Dr. Yolan Bender shared her experience working at the New Orleans VA Medical Center after Hurricane Katrina. The New Orleans VA hospital was closed for a period of several months following the hurricane and VA staff were being asked to perform their duties at VA outpatient clinics located a minimum of 90 minutes away from New Orleans. This was a tremendous burden on NFFE-IAM members who were already dealing with personal difficulties related to the devastating hurricane. The Union stepped in and made sure that Dr. Bender and others being forced into long commutes were being paid – and paid overtime – for their new burdensome commute times.

Erin Kidwell discussed how she was uncertain about her employment with the Forest Service as an expecting mother in the middle of her career. Thankfully, NFFE helped her get a Child in the Workplace Agreement, allowing her to spend eight weeks at home with her new baby and then take him into the office once she returned to work. NFFE assisted Erin with another agreement for her second child, as well as countless other new parents at the Forest Service. Erin told the roundtable that she appreciated the union-negotiated flexible time agreements because she had the ability to raise her family while still working. Through her experience, Erin understands the importance of having a union, so she took on a leadership position on the NFFE Forest Service Council to help her coworkers join and keep active with NFFE.

Andy Vanderheuel took this opportunity to explain how new wildland firefighters were required to pay out of pocket for fire boots costing $350-600 before their first day. However, NFFE stepped in and negotiated for a boot stipend, requiring the agency to buy the boots initially, and also provide a stipend every three years for replacement boots.

“I am so proud of how NFFE’s leaders who participating in this Roundtable with the White House – Yolan Bender, Erin Kidwell, and Andy Vanderheuel – represented the members of this Union,” stated NFFE National President Randy Erwin.  “I believe the Administration’s new guidelines will increase membership at NFFE, allowing us to increase our power on Capitol Hill to ensure our members receive fair pay, benefits, and treatment in the workplace. These are very positive changes, and hopefully, they represent just the tip of the iceberg in terms of positive changes we will see under this Administration.”