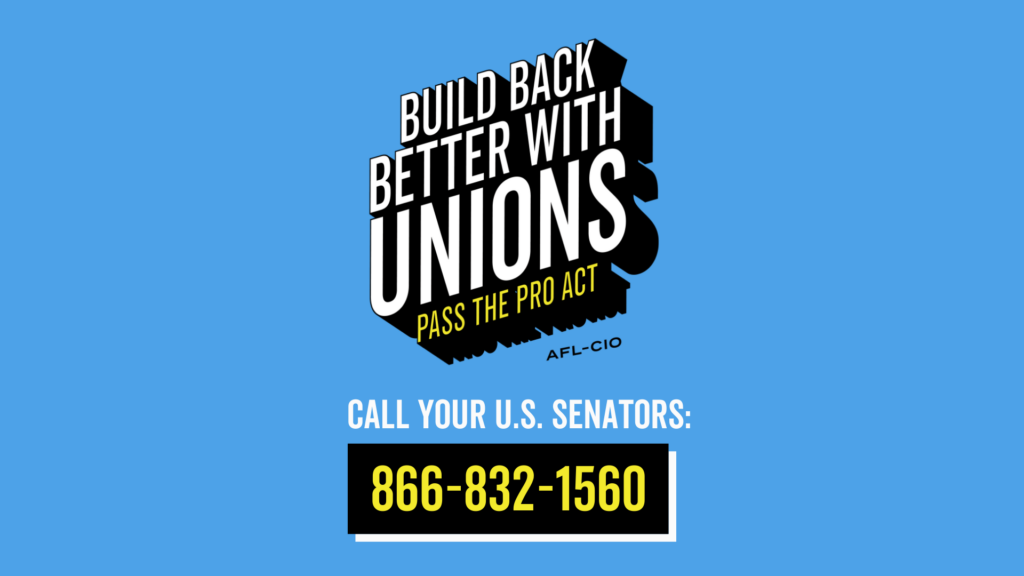 The National Federation of Federal Employees (NFFE) is urging the U.S. Senate to pass the Protecting the Right to Organize (PRO) Act, which strengthens workers’ rights to unionize. The right to freely form a union is increasingly under threat of intimidation and interference from management, in both the private and public sectors. The lack of unionization has led to increased economic inequality, as working people have been denied a voice in their workplace on pay and benefits, causing more families to fall into poverty.

The PRO Act will address multiple issues by expanding the enforcement powers of the National Labor Relations Board (NLRB), in addition to reinforcing protections for workers that engage in collective action. The bill would level the playing field by prohibiting employers from requiring their employees to attend “captive audience” meetings in which management attempts to convince workers to vote against the union. In addition to imposing fines on employers and management offices who violate the law, the bill would also give workers the opportunity to bring their case to federal court.

The PRO Act would also override state “right to work” laws, which are designed to give more power to management at the expense of workers, and have had the effect of lowering wages and eroding pensions and health care coverage in states where they have been adopted.

All working people need and deserve the collective power of a union to help achieve decent pay, secure benefits, flexible schedules, fair treatment, and basic respect and dignity at work. The PRO Act would make it easier for workers who want to form or join a union to do so, and the latest economic research shows that higher union density raises wages, reduces inequality, increases productivity and stimulates economic growth.

A version of the bill has already passed in the House of Representatives, but the legislation is facing opposition in the Senate. In response, NFFE has joined together with the AFL-CIO and other affiliated unions on a letter urging Senators Mark Warner (D-VA), Kyrsten Sinema (D-AZ), and Mark Kelly (D-AZ) to support and pass the PRO Act. The three senators are the only Democratic senators who have not signed on to sponsor the bill. NFFE encourages everyone to contact their Senators to ask for support of the PRO Act, especially those in Virginia and Arizona.