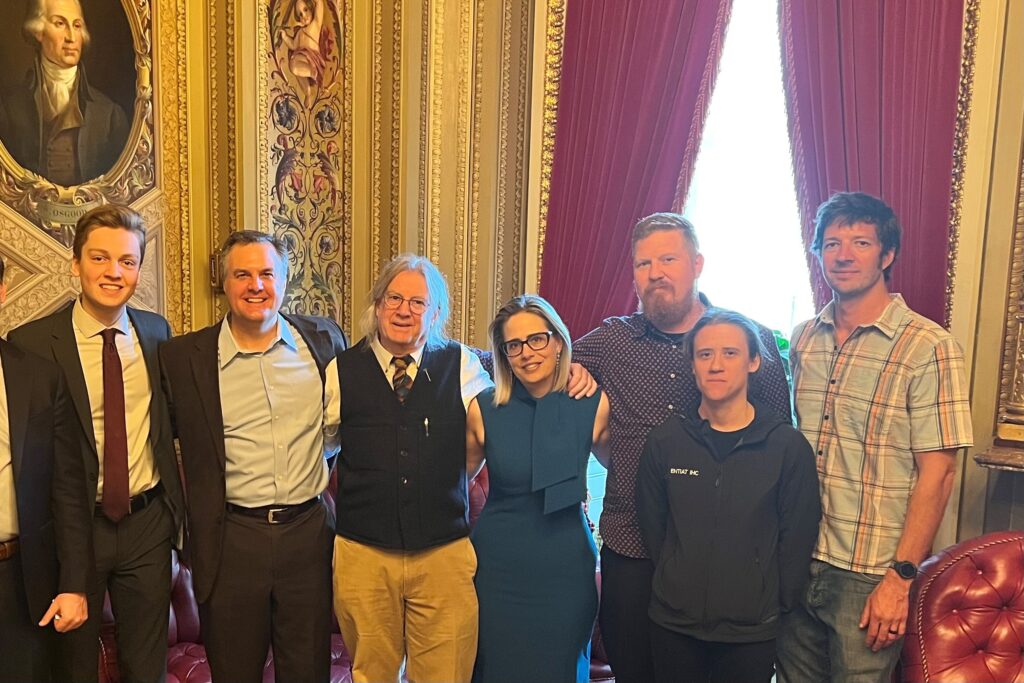 Last week, a group of NFFE wildland firefighters from around the country visited Washington, DC to speak with lawmakers from across the political spectrum to rally support for the Tim Hart Wildland Firefighter Classification and Pay Parity Act (H.R. 5631), also known as Tim’s Act. The bill is named for Tim Hart, a Forest Service Smokejumper who was tragically killed after a jump into the Eicks Fire in New Mexico last year. The legislation seeks to completely overhaul the federal wildland firefighting workforce to improve the pay, benefits, and safety of our of nation’s heroes on the frontlines of the wildfire crisis.

The wildland firefighters who traveled to the Capitol had meetings with nearly two dozen different Senate and House offices of both Republicans and Democrats, largely from states most directly affected by wildland fires. In these meetings, NFFE firefighters spoke from personal experience as to how dire the situation has become and why the components within Tim’s Act are so badly needed.

“The reforms in Tim’s Act are only revolutionary if you are working for the federal government in land management,” said Ben Elkind, a Forest Service Smokejumper. “Pay starting at $20 per hour for dangerous work, housing stipends for remote duty locations, mental healthcare, and other common sense benefits are common practices for good employers across the country. Often companies are even including childcare stipends so their employees can focus on work and be more productive, staying in their positions.”

“As fires continue to intensify, investing in a workforce that can help to prevent and mitigate catastrophic wildfires is critical,” continued Elkind. “Unfortunately, we are dealing with a work model from the 1950s with a lot of bandaids thrown on top, so rethinking how we work moving forward is difficult for many people with deeply held beliefs from decades past. It’s important that the voices from the actual firefighters are heard. Legislators, OPM, and even our own agency leadership still don’t understand what we do for a job, or how difficult it is to continue in this profession while maintaining any work-life balance.”

One important meeting was with Senator Kyrsten Sinema (D-AZ) (pictured above), who met with the group just off the Senate Floor in The President’s Room of the U.S. Capitol. The Senator conveyed a personal dedication to reforming wildland firefighting, having experienced traumatic events throughout the years in Arizona. Holding back tears, the Senator spoke of the Granite Mountain Hotshot Crew, which lost 19 members to the Yarnell Hill Fire in 2013. Sen. Sinema promised her support for Tim’s Act and indicated she believed that this legislation had the support of the entire Arizona congressional delegation.

Another significant meeting was held with Rep. Dan Newhouse (R-WA), Chairman of the Congressional Western Caucus, which aims to protect the country’s Western region through safe forest management. The Representative took a keen interest in the stories NFFE wildland firefighters shared and emphasized his commitment to active forest management, including hazardous fuels reduction and prescribed burns, in addition to supporting federal wildland firefighters.

“It was incredible that our NFFE wildland firefighters were able to meet with so many lawmakers to garner bipartisan support for Tim’s Act,” said NFFE National President Randy Erwin. “NFFE has been fighting for decades to reform the federal wildland firefighting workforce, but significant change is absolutely necessary now that wildfire seasons are so much longer and fires are so much more frequent and dangerous. Members of Congress heard first-hand from NFFE wildland firefighters that now is the time to take significant action. We simply cannot wait any longer for these necessary changes in the Tim’s Act.”