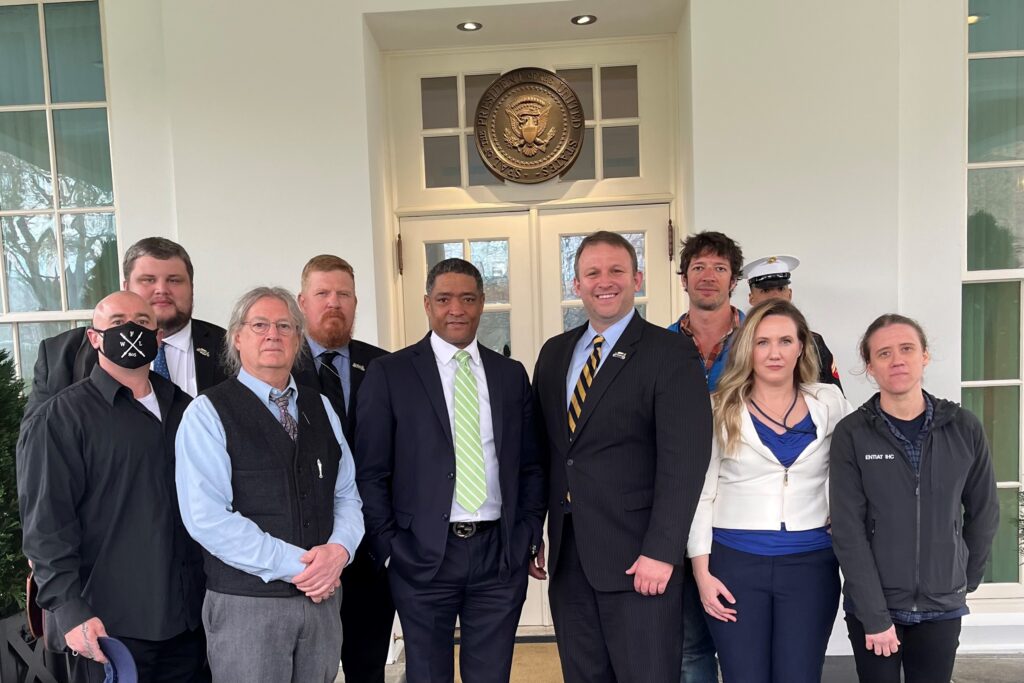 Last week, several federal wildland firefighters of the National Federation of Federal Employees (NFFE) visited the White House to urge Biden-Harris Administration officials to increase pay for federal employees on the front lines of the wildfire crisis. The group met with Cedric Richmond, Senior Advisor to the President, and Erika Dinkel-Smith, Director of Labor Engagement at the White House.

The group expressed appreciation that President Biden increased the minimum wage for wildland firefighters to $15 an hour last year, but insisted that was too little, too late for many working in the Forest Service. Employees are now leaving the Forest Service for other jobs, as the dangerous and grueling work does not pay nearly enough for them to provide for themselves, let alone a family. Those that continue to serve the country as wildland firefighters struggle to pay for basic necessities like housing and healthcare, leading to homelessness.

Hannah Coolidge, a NFFE-IAM member who has spent eight years as a hotshot firefighter, came to D.C. because she has seen firsthand the effects of long, hard fire seasons and low pay on firefighter morale and retention.

“In our White House meeting with Cedric Richmond, we explained to him that it is common for firefighters with over ten years of experience to make less than $20 an hour, and that to make a living wage many firefighters must work upwards of a thousand hours of overtime each fire season,” said Coolidge. “And even working those long, hard seasons is not enough to achieve financial stability—on my hotshot crew last season, we had thirteen employees living out of their trucks due to the expensive rental market in our area and lack of government housing.”

“With the rising cost of living combined with a tight labor market and an increase in minimum wages above what we earn, many skilled wildland firefighters are realizing that they can make more money and work less doing almost anything else, not to mention spending more time with family,” continued Coolidge. “The consequence is that we are losing skilled wildland firefighters faster than we can recruit them and we are asking the remaining workforce to accomplish more in terms of fire suppression and prevention, with fewer qualified people to do the work. This in turn leads to increased burnout and further retention issues. The first step in mitigating this disaster is to significantly and permanently increase pay for wildland firefighters.”

“It is unconscionable that these dedicated firefighters who risk their lives each fire season cannot support themselves because the government will not provide them with a living wage,” said NFFE National President Randy Erwin. “The fact that our country’s bravest public servants are forced into homelessness is reprehensible, but it is also leading to serious retention and safety issues for those who remain dedicated to fighting wildfires. NFFE is shining a light on this atrocity and is committed to rectifying this injustice.”