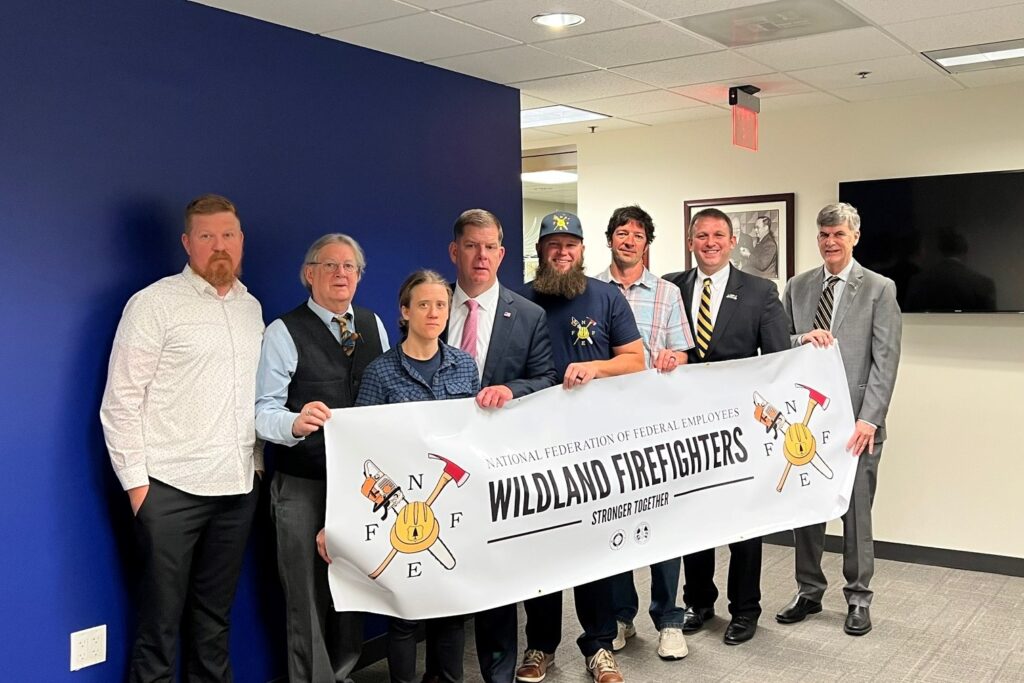 Earlier this month, NFFE wildland firefighters met with several high-ranking officials within the Biden Administration to urge the adoption of significant workforce reforms.

Marty Walsh, the U.S. Secretary of Labor, visited NFFE Headquarters to discuss issues with union leadership and wildland firefighters. The hour-long conversation touched on many concerns, including retirement benefits, which the Labor Department has authority over. Firefighters stressed the importance of maintaining “6(c)” retirement status in the event of an injury, as well as allowing temporary seasonals to buy back and earn time towards their annuities. Walsh was alarmed by stories of firefighters receiving poor retirement benefits for serving their country in dangerous positions and expressed his commitment to fixing these issues.

In a meeting with the Director of the Office of Personnel Management (OPM), Kiran Ahuja, NFFE wildland firefighters called on the department to increase the number of boots on the ground in order to increase safety and ease the load placed on current crews. Dan Ostler, an Engine Captain from the Coronado National Forest, explained to Ahuja how wildland firefighters are leaving the service not only for higher-paying fire stations, but for jobs at places like UPS and Walmart because of the stress and safety concerns that stem from an understaffed workforce. NFFE wildland firefighters also conveyed the need for adequate living conditions while assigned on fires to limit the number of nights spent sleeping in trucks or on the ground unless in emergency situations.

The group also visited Forest Service Headquarters to speak with Homer Wilkes, the U.S. Under Secretary for Natural Resources and Environment. Among the many items discussed, Max Alonzo, former USFS wildland firefighter and current NFFE business representative, explained how laying off and re-hiring temporary seasonals was a nonsensical practice for the workforce. Alonzo and his colleagues insisted that the Forest Service convert these positions to permanent careers, allowing for all wildland firefighters to earn time towards their retirement benefits and maintain their healthcare programs year-round. Additionally, the group advocated for expanded training and career mobility within the Forest Service, which would limit burnout from being siloed into one position for several years.

“To have NFFE Wildland Firefighters meet with government officials at the highest level was an excellent opportunity for our members to have their voices heard on issues that directly impact them and their coworkers,” said NFFE National President Randy Erwin. “The changes that we lobbied for are critical for the future of wildland firefighters and the entire workforce. I am pleased that our suggestions were well-received and we look forward to working with agency leaders to implement reforms as quickly as possible. These improvements will not only better the lives of wildland firefighters, they are absolutely necessary for the government to properly address the wildfire crisis.”