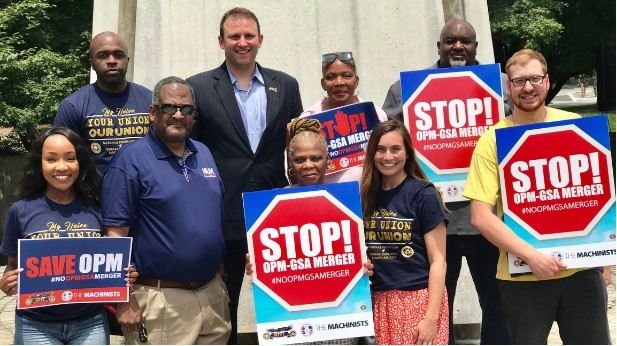 Earlier this year, the Trump administration unveiled a proposal to break apart the U.S. Office of Personnel Management (OPM), sending its operational parts to the General Services Administration and its policy arm to White House Executive Offices.  NFFE and other labor unions heavily criticized the proposal as a frivolous move without a plan.  Members of Congress from both parties agreed and ordered the merger stopped until a study is done, which is congressional-speak for ‘dead on arrival.’

Perhaps the most interesting part of this tale comes from a Washington Post story that cites the Administration’s change of heart came from President Trump himself after watching a television segment featuring NFFE Executive Director Steve Lenkart who spoke out against the merger on “Government Matters,” a Washington, D.C. based show on politics and government.  An excerpt from the Post article:

In recent weeks, Trump soured on continuing the fight after seeing an obscure Washington-area television program about government, according to White House officials, who spoke on the condition of anonymity because they were not authorized to speak publicly. WJLA’s “Government Matters” has aired several segments about the OPM proposal. Top budget office and other White House officials were rushed to meet with Trump the following day.

The president told his top advisers that with a win unlikely, the already unpopular plan would bring him poor reviews. Acting chief of staff Mick Mulvaney and acting budget director Russell Vought, along with Margaret Weichert, the White House official leading the effort, tried to persuade Trump to keep going in line with conservative principles of shrinking government, the officials said.  But the president stood firm.

Lenkart again appeared on Government Matters in June, this time to criticize the Administration’s decision to close all of the 25 Civilian Conservation Centers at the USDA, which are ran by NFFE members.  Lenkart severely censured the idea and derided USDA Secretary Perdue’s political naivete for endorsing such a move without stakeholder input.  Shortly after the segment aired, the Administration completely reversed its decision and Secretary Perdue promised full funding and support for the centers.

Has NFFE become a Trump-Whisperer?  Hard to say, but the hard-fought NFFE victories are very real.
Become a Member
NFFE Toolbox
Advocacy
Tweets by NFFE_Union