Saturday morning, tens of thousands of unionists, civil rights advocates, activists, and everyday citizens converged upon the national mall in Washington, D.C. to commemorate the 50th anniversary of the 1963 March on Washington. After fifty years – and all of the triumphs and tribulations that have erstwhile intervened – the message of jobs and freedom remained as potent as ever.

NFFE members, leaders, and staff were proud to join with our IAMAW brothers and sisters in a march from the Washington monument to the Lincoln memorial where the commemorative events were held. For those who were unable to make it to the march, the feelings of solidarity, hope, and resolve were palpable. See the sights from the memorial March in the photo album below.

Click Here for Pictures from the 50th Anniversary March on Washington 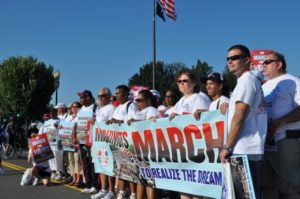